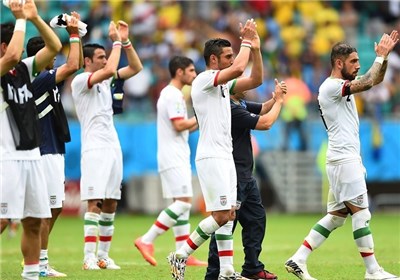 TEHRAN (Tasnim) – Iran has fallen to 49th in the latest FIFA rankings released on Thursday after the World Cup, with winner Germany replacing Spain at the top.

Japan is now Asia’s highest-placed team. The team sits 45th, improving by one place, while Iran has dropped six spots to 49th – both finished bottom of their respective World Cup groups with just one point.

Iran played out a goalless draw against Nigeria, lost to Argentina 1-0 and suffered a 3-1 loss against Bosnia and Herzegovina in Group F.

Germany has gone top of the rankings for the first time in around 20 years after winning the 2014 FIFA World Cup and beaten finalist Argentina climbed three places to sit in second.

Netherlands moved up 12 spots to return to the top three for the first time in two years.

Colombia is fourth and Belgium round off the top five after its run to the quarter-final.

Uruguay is sixth and host Brazil has dropped four spots to seventh. The Brazilian outfit conceded 10 goals in its past two matches.

Former world champion Spain fell from first place to 8th spot as it crashed out in the group stage. Switzerland dropped three places to finish 9th while France climbed up seven places to the 10th spot.