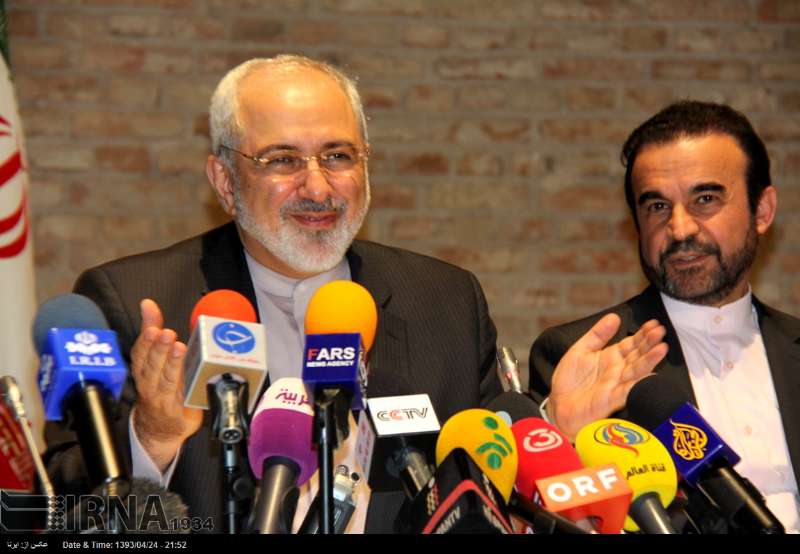 Vienna, July 15, IRNA — Iranian Foreign Minister Mohammad Javad Zarif underlined that it is now the best time and opportunity for the West to reach a final deal with Iran, and said that Iran is ready to remove all the rational concerns surrounding its nuclear energy program.

ˈWe are ready to remove all logical concerns,ˈ Zarif said, addressing a press conference in Vienna on Tuesday.

ˈThe only solution which is acceptable is the real one,ˈ he added.

The Iranian foreign minister reiterated that Iranˈs nuclear program is completely peaceful, and said, ˈThe two sides are experiencing a difficult and crucial trend in their ongoing negotiations in Vienna now.ˈ

Zarif went on to say that the progress made in the negotiations has been enough to convince the two sides to continue their talks after the July 20 deadline which was envisaged in the Geneva interim deal signed by Tehran and the six world powers in November.

ˈThe ultimate deadline is November 25,ˈ the Iranian foreign minister said, implying that the negotiations could continue for six more months.

Iran and the six world powers agreed in their Geneva deal that the July 20 deadline could be extended for another six months, if all the seven nations agree.

Zarif, however, said that Iran does not like the negotiations to continue after July 20, ˈbut this is possibleˈ.

He said that some Group 5+1 (the US, Russia, China, France and Britain plus Germany) negotiators believe that extending the negotiations beyond July 20 can be useful.

ˈWe continue our work with the belief that there is a way to move forward,ˈ the Iranian foreign minister said.

Zarif pointed to the number of centrifuges – a bone of contention in the talks between Iran and the sextet – that Iran wants to maintain, and stressed that reducing the number of Iranˈs centrifuge machines is just one way, ˈbut there are also some other proven scientific ways to make sure that Iranˈs nuclear program is peaceful as well.ˈ

He noted that Iran has already made its decision, adding, ˈWe have shown that we are serious in talks.ˈ But he reminded that reaching a solution and final deal needs seriousness of both sides, ˈit is a two-wayˈ street.

ˈIt is necessary to take a serious political decision and serious decision means that to reach a solution we need to think of the way of ensuring the peaceful nature of Iranˈs nuclear program,ˈ Zarif said.

He reiterated that the text of the final agreement has reached a level that it is sufficiently transparent and it can be signed as soon as ˈpolitical decisions are madeˈ.

The Iranian foreign minister also said that he is due to meet with Director General of the International Atomic Energy Agency (IAEA) Yukio Amano this week.

He further pointed to Britainˈs cabinet reshuffling, and expressed the hope that the new British foreign secretary ˈwill adopt a constructive diplomacyˈ towards Iran.

Asked if Iran would accept to endorse the additional protocol to the Non-Proliferation Treaty (NPT), the foreign minister stressed that the parliament is the only authority vested with the power to sign or reject the document.

Earlier in the day, Zarif underlined efforts by his team of negotiators and their counterparts in the G5+1 to end the artificial deadlock impeding attainment of a final agreement between the two sides.

ˈWe are striving to end this artificial deadlock which has been created based on an illogical framework, and reach a comprehensive agreement,ˈ Zarif told reporters in Vienna.

Stressing that he has had good exchanges of views with the G5+1 representatives during this round of talks, he said, ˈOf course, we still need serious discussions at the level of the political directors.ˈ

On Saturday, Iranian Deputy Foreign Minister Seyed Abbas Araqchi said the seven nations have made over 60% progress in drafting the text of a final deal, although wide differences have still remained over the contents of the agreement.

ˈWe have not yet reached a major agreement on the key content issues,ˈ he added.

Araqchi also underlined Iranˈs determination to continue the negotiations to restore all its rights, and said, ˈWe wonˈt withdraw from our positions.ˈ