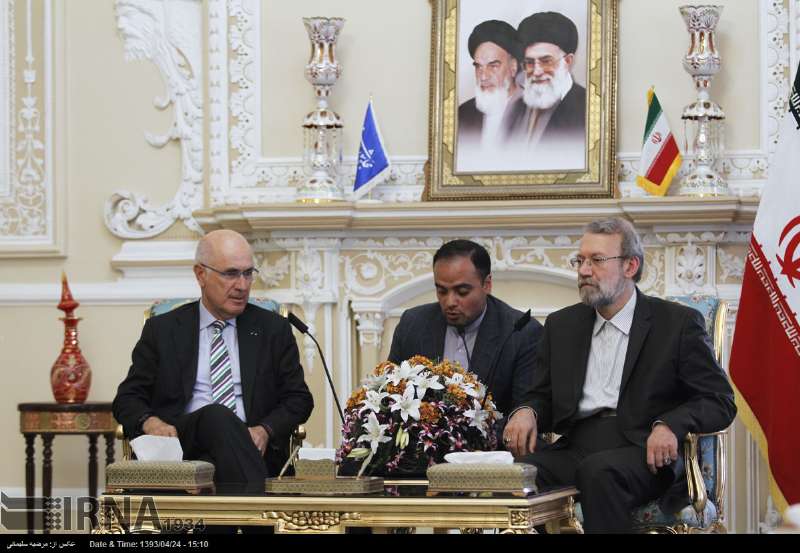 US support for terrorism fuel insecurity in ME: Larijani

Iran’s Majlis Speaker Ali Larijani has blamed the United States and its regional allies for the growing insecurity and chaos in the Middle East.

“Supporting terrorism by the US and certain regional countries is the root cause of insecurity and chaos in the region,” Larijani said in a meeting with Chairman of the Foreign Affairs Committee of the Spanish Parliament Josep Antoni Duran i Lleida in Tehran on Tuesday.

He denounced the Israeli regime’s crimes in the Gaza Strip and said independent countries are expected to stop remaining indifferent to the killing of women and children and massacre of innocent Palestinians.

“The issue of supporting Palestine and the Gazans despite Western countries’ silence is among issues of interest for all regional and Muslim countries,” the Iranian Majlis Speaker added.

Israeli warplanes have struck more than 1300 targets across Gaza, which is home to around 1.8 million Palestinians, since July 8. The strikes have so far claimed the lives of 204 people with more than 1500 others injured.

According to the United Nations, 80 percent of the casualties have been civilians.

The Spanish parliamentarian, for his part, said the US and its allies have made a strategic mistake in dealing with terrorism in the region, and suffered defeat.

He also pointed to the ongoing nuclear talks between Iran and the P5+1 in the Austrian capital city of Vienna and said his country supports the negotiations.

He expressed hope that Iran and the P5+1 would reach an agreement based on mutual respect which would take Iran’s interests into consideration and allay international concerns.

On July 3, negotiators from Iran and the six states, the United States, France, Britain, Russia and China — plus Germany, officially opened their sixth round of talks this year in Vienna to discuss drafting a final nuclear accord ahead of a July 20 deadline.