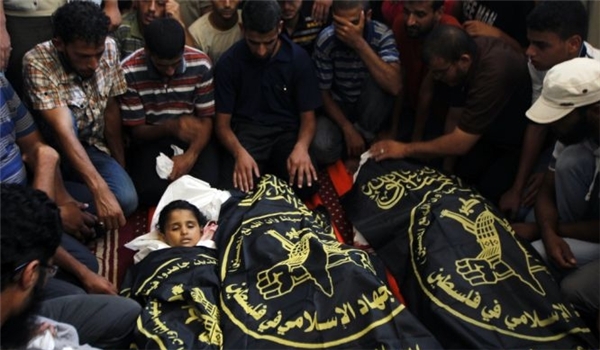 TEHRAN (FNA)- The Association of Islamic Societies of University Students in Europe in a statement issued on Wednesday condemned Israel’s continued and intensifying aggressions against the defenseless Palestinians in the Gaza Strip.

“The usurper Zionist regime should know that although it is possible to lapse several days in the silence of international bodies, the divine reality is that a harsh revenge will be taken from them,” part of the statement read.

It noted that the scenario of savage attacks by the Zionist regime on the defenseless people of Gaza under the absolute silence of the international community is another shameful page in the large number of crimes of Israel’s bloodsucking regime and its supporters.

Israel has been pounding the blockaded Gaza for 9 consecutive days, killing at least 202 people and injuring more than 1,500 others.

In relevant development, Iranian students in the holy city of Mashhad in Northeastern Iran staged a gathering in front of the UN office in the city this afternoon to protest at the Zionist regime’s brutal aggression against the Palestinian territories.

On Monday, four Iranian student unions in a gathering in front of the UN office in Tehran asked the world body to break its silence on the crimes committed by the Zionist regime against the Gazans and prevent the genocide of the Palestinian people by Israel.

“We as students unions have held this gathering to protest at the UN silence as our first step to support the oppressed Palestinian people,” said Nasser Arasteh, one of the union leaders, addressing the gathering on Monday.

Also, Alireza Karimi, another union leader, blasted the silence of the world states on the Zionists’ crimes against the Palestinians, and asked, “Why have those countries which claim to be supporters of human rights now avoided defending the people who are facing the Zionist regime’s savage attacks?”

Saeed Asqarian, the secretary-general of the students’ Islamic community, underlined the necessity for the whole international community, specially the Muslims, to take a serious position against the Israeli inhumane attacks on the Gaza Strip.