Syria’s Assad to be sworn in, set out plans for new term 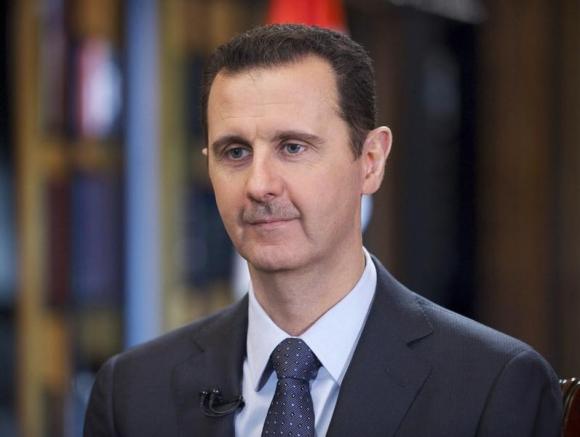 (Reuters) – President Bashar al-Assad will be sworn in and set out his plans for a new seven-year term on Wednesday, state media reported, after his victory in an election that affirmed his grip on power more than three years into Syria’s civil war.

Dismissed as a sham by Assad’s opponents, the vote was held in June in areas of central and northern Syria that remain under state control. Large areas of Syria have fallen to an insurgency dominated by Islamists, including a powerful al Qaeda offshoot known as the Islamic State that has also seized swathes of Iraq.

Assad, supported by Russia and Iran, has defied calls by Western states for him to step aside during the conflict that started in 2011 with protests against his rule before descending into a war that has killed at least 170,000 people.

Assad is due to give a speech for the occasion that will set out his policy for the coming seven years, the Syrian presidency said in a statement on its official Facebook page.

“He’s going to say: ‘I am the state, I am Syria, and if the West wants access to Syrians, they have to come through me’,” said Joshua Landis, an expert on Syria based at the University of Oklahoma in the United States.

His message is “that he is the only game in town, for stability, security, counter terrorism” and a solution to a refugee problem created by a conflict that has driven 3 million people out of the country, Landis said.

Assad has shored up his control over a strategic corridor of territory stretching north from Damascus, taking back major cities including Homs. Backed by Lebanese Hezbollah fighters, his forces are now squeezing rebels in Aleppo.

But to the east and northeast, large parts of the country are in insurgents’ hands. The militant Islamic State has expanded its control in recent weeks, defeating other Islamist factions with new weaponry brought in from Iraq.

The United States, which has repeatedly said he has lost legitimacy, had described the election as meaningless.

Official returns showed Assad winning 88.7 percent of the vote. It was the first contested presidential election in Syria. Previous votes had been referendums to approve the appointment of Bashar and his father, Hafez al-Assad, who died in 2000.

Russia, which has supplied Assad with crucial diplomatic and military support, said the election had been fair, free and transparent and criticized governments that denounced it.

Syria descended into civil war after protests inspired by uprisings against autocrats across the Arab world drew a violent state response. Western-backed efforts to forge a political solution have failed to make any progress.

The United Nations has said that about 10.8 million people in Syria are now in need help, of which 4.7 million are in hard-to-reach areas.

Assad has since the outset depicted the battle as one against extremism – an assessment which diplomats and analysts say would in the Syrian leader’s eyes have been bolstered by the Islamic State’s recent gains in Iraq.

“You have had this massive distraction,” a Western diplomat said, referring to the Islamic State’s gains. “This has removed pressure.”