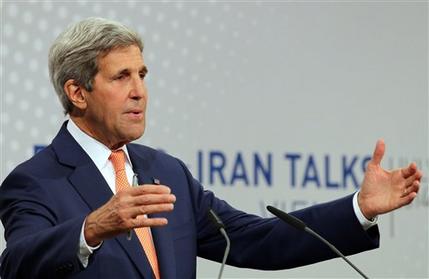 WASHINGTON (AP) — World powers and Iran still face significant gaps in their negotiations to curb Tehran’s nuclear program, foreign ministers said Tuesday while forging ahead with efforts to secure a deal that could finally bridge a decades-long diplomatic chasm between the Islamic republic and the West.

Sunday’s deadline for an agreement could be extended, but that issue is controversial, too. And without an accord on the nuclear talks, the U.S. risks losing opportunities to negotiate with Iran on other pressing regional issues, including sectarian fighting in Syria and Iraq that is threatening to rip apart the Mideast.

Aside from persuading Iran, President Barack Obama, seeking an elusive foreign policy victory, must also convince a suspicious Congress and reluctant Arab allies of the long-term benefits of securing a deal.

“It is clear that we still have more work to do,” Secretary of State John Kerry said Tuesday, shortly before leaving Vienna, where negotiators had been holed up for weeks working on a plan to prevent Iran from building an atomic bomb but still let it develop a peaceful nuclear energy program.

He cited “tangible progress” on important issues in the talks and stated his belief “that there is a way forward,” but he added that “there are also very real gaps on other key issues.”

Iranian Foreign Minister Mohammed Javad Zarif suggested it was likely that the talks would continue beyond a Sunday deadline and into a six-month extension.

“This is a process which is worth continuing,” Zarif said in Vienna, speaking separately from Kerry and diplomats from Britain, France, Germany, Russia and China, who also attended the talks.

“We are prepared to show the necessary maneuvering room for our friends to convince themselves that Iran’s program is always peaceful,” Zarif said.

The negotiations over Iran’s nuclear efforts have endured on-and-off since 2003. New hope for an agreement soared after last year’s election of Iranian President Hassan Rouhani, a relatively moderate leader. He won office by promising to bolster his country’s crumbling economy, in part by securing relief from bruising Western trade sanctions that punish Tehran for its nuclear ambitions.

But there are skeptics on all sides. Hard-liners in Iran fear the talks will result in a scaling back of their country’s nuclear capacity, and some in Congress fear they won’t.

Tehran says it needs nuclear capacity for energy and medical purposes. Many lawmakers in Congress are deeply concerned about the Iranians’ intentions – and whether they can be trusted to maintain a legitimate nuclear program. And American allies in the Mideast – including Israel and Saudi Arabia – are bitterly opposed to any deal they say could let Iran build an atomic weapon.

Congress is already gearing up to impose more sanctions against Iran as a way of forcing its hand, and it’s unclear whether the White House can hold lawmakers off.

An extension of the international negotiations would also open Obama to criticism that he’s allowing Iran to stall and seek sanctions relief while moving forward on its nuclear program. Last week, Iranian Supreme Leader Ayatollah Ali Khamenei said Tehran intends to expand its uranium enrichment capacity far beyond what most of the rest of the world would permit.

“I could not imagine that the United States and the (other world powers) would accept a deal under those standards,” Menendez, D-N.J., said Tuesday. “We’ll just have to wait to see first and then we’ll act accordingly.”

An agreement would mark one of the most significant achievements of Obama’s presidency and vindicate his longstanding preference for diplomacy over military action. But failure would be a stinging defeat for a president who is already under heavy criticism from opponents over his approach to the Middle East and Russia.

The negotiations seem likely to be extended for at least several more months, although the onus will be on Obama to explain why he believes just a little more time will clinch a deal. An agreement presumably would force the West to trust Tehran – at least to some extent – to abide by limits for uranium enrichment and give more access to international weapons inspectors.

Success would not provide immediate relief to Iran from sanctions that have become so layered and intertwined that their effects could not be lifted at once. And some critics of Iran in the region want the punishing sanctions to remain. But in nearly all of the world’s major battle zones – from Syria to Iraq, Afghanistan and Gaza – Iran could hold major sway in pushing peaceful efforts, and if the nuclear talks fail now, there’s little or no reason for Tehran to listen to the West in trying to resolve such crises.

“The nuclear negotiations are no longer just a means in themselves – they’re also a means into opening a gateway for regional dialogue with Iran that’s really necessary,” said European Council on Foreign Relations policy fellow Ellie Geranmayeh, who talks regularly with the nuclear negotiators. “If the negotiations completely fail, then the West is put in a very difficult position in trying to engage Iran to be more constructive in the region to Western interests. And from the Iranians’ side, there is zero incentive, really, for them to engage in regional dialogue.”

“All sides have just too much to lose if they walk away at this stage,” Geranmayeh said.