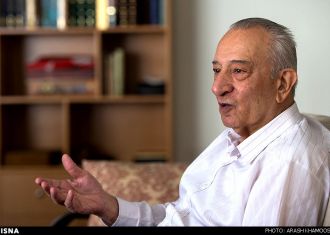 Tehran, July 16, IRNA – The Islamic Republic of Iran should not yield to excessive demands made by the West over its nuclear program, said Akbar Etemad.

He made the remark in an exclusive interview with ˈTehran Timesˈ published Wednesday, adding that opposition to Iran’s nuclear activities by the US and certain Western countries is politically motivated.

Etemad, known as the ˈfather of Iran’s nuclear program” was the first president of the Atomic Energy Organization of Iran (AEOI) from 1974 to 1978, and the country’s nuclear project started under him.

On the argument by the West that Iran does not need nuclear energy due to its vast oil and gas reserves, Etemad said that having access to nuclear technology is more important than having nuclear energy itself.

“Nuclear technology is not only for producing electricity. When a country is developing and has various industrial activities, it needs to have access to nuclear technology,” he said. “So you need to build power plants, otherwise there is no use to get the technology.”

The Paris-based former nuclear chief recalls when Iran first began considering the option to master nuclear technology as a source of energy. At the time the prospect of oil reserves for the next thirty years was not good because the domestic consumption was constantly rising and Iran was exporting oil largely so it had to find another source of energy, he notes.

In addition, nuclear technology is not the one that you could get in five or 10 years, it needs a very long time before it could become efficient, Etemad stated.

“We needed 30 years time to master nuclear technology. So we started at that time. At that time we had oil revenues and we could go into a large program,” he noted.

“Before revolution we had good relations with all counties and there were not conflicts. After the revolution, the perception of the country was changed. Iran entered into conflict with the US and European countries,” he told the daily.

Etemad says the West went after finding pretexts against Iran’s nuclear program and the pretext was that Iran wanted to build a nuclear weapon, which was not true. “Iran only wanted to have nuclear technology.”

As the US and European countries were politically against Iran, they started to invent excuses against the country and didn’t cooperate with Iran, he adds.

Halting enrichment was the big mistake:

Etemad also believes that Iran made a mistake in 2004 when it accepted to temporarily suspend its uranium enrichment program and implement the Additional Protocol, stating that enrichment activity is not in violation of the nuclear Non-Proliferation Treaty (NPT).

In November 2004, Iranian nuclear negotiators, who were in talks with Britain, France, and Germany, acting on behalf of the European Union, announced a voluntary and temporary suspension of the country’s uranium enrichment program and also the voluntary implementation of the Additional Protocol.

“It was far beyond NPT conditions,” he says.

“The fact that Iran accepted those conditions at that time showed to them that Iran was ready to accept everything,” Etemad says, adding that from the beginning, Iran should have stuck to the letter of the NPT and should not have allowed the Europeans to impose something that was not included in the NPT.

He also suggests that Iran should only accept the protocol when it is carefully studied by Iranian officials and is approved by the Majlis, otherwise only a handful of countries cannot impose it on Iran.

Commenting on the ongoing nuclear negotiations between Iran and the 5+1 group – the US, France, Britain, Russia, China, and Germany – Etemad says he is not optimistic that a tangible result would be achieved, because the Westerners are not ready to remove sanctions on Iran and have normal relations with the country.

“The West is imposing excessive conditions on Iran. Iran should not accept anything additional. Everything that Iran wants to accept should go through international bodies, not that only five or six countries would impose that on Iran.”

Iran and the 5+1 group – the permanent members of the UN Security Council plus Germany – are leading negotiations to build on an interim deal struck in November, under which Tehran agreed not to expand its nuclear program for six months in exchange for limited sanctions relief.

The agreement came into force on January 20. Iran and the major powers have set a July 20 deadline to clinch a long-term deal that would lead to a gradual lifting of all nuclear-related sanctions.

When asked about the role France plays in the talks, he said France would not do anything that Israel would not like, so Israel is indirectly imposing things on Iran.

“Mind you, if Israel has nuclear weapons, it is France that has given it to them,” he told the English-language paper in conclusion.