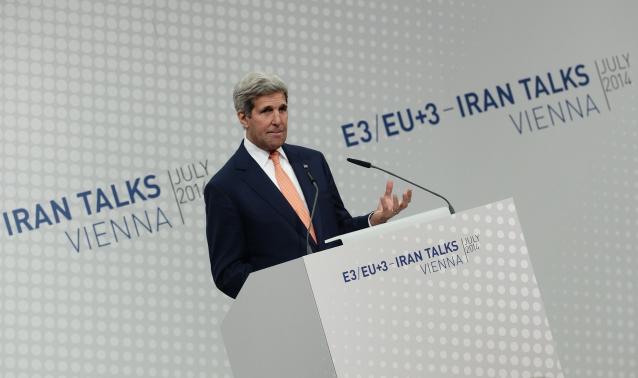 U.S. Secretary of State John Kerry speaks during a news conference in Vienna July 15, 2014. Kerry on Tuesday dismissed the idea that Iran could maintain its current number of nuclear enrichment centrifuges as part of a long-term deal with six world powers that would lead to a gradual end of sanctions.

(Reuters) – Iran and six world powers on Tuesday appeared likely to extend talks on Tehran’s nuclear program beyond a July 20 deadline, while Washington said the Islamic Republic must cut its capacity to make nuclear fuel to secure a deal to end sanctions.

Iran and the six nations are trying to bridge differences in negotiating positions over a deal intended to end a decade-long dispute over Tehran’s nuclear programme, which Western nations fear may be aimed at developing a nuclear weapons capability. Iran says it is for peaceful purposes.

“We have made it crystal clear that the 19,000 (nuclear centrifuges) that are currently part of their programme is too many,” Kerry told reporters after three days of talks with Iranian Foreign Minister Mohammad Javad Zarif.

At a separate news conference, Zarif responded by saying that “insisting on the number of centrifuges is useless.”

In a New York Times interview, Zarif floated the idea of Tehran keeping its enrichment programme at current levels for a few years before expanding it. Diplomats said the Iranian delegation had raised this issue with the six in recent weeks.

Kerry was responding to a question about a major speech by Iran’s Supreme Leader Ayatollah Ali Khamenei, which diplomats said has limited the ability of the Iranian delegation at the talks to make concessions with the six powers and could make it difficult for Tehran to reach a deal. (Full Story)

Kerry said the talks – involving the United States, Britain, France, Germany, Russia and China as well as Iran – had made tangible progress on key issues but gaps remained.

“It is clear we still have more work to do and our team will continue to work very hard to try to reach a comprehensive agreement that resolves the international community’s concern.

“There are more issues to work through and more provisions to nail down to ensure that Iran’s programme can always remain exclusively peaceful,” Kerry said.

Zarif said while he had had good talks with the U.S. diplomat, serious differences remained between the two sides.

He suggested prolonging the talks past July 20 was likely since: “I see an inclination on the part of our negotiating partners that they believe more time may be useful and necessary.”

He added that no decision on an extension had been taken, though several Western diplomats said prolonging the talks beyond July 20 was very likely.

“Given that ‎it is highly improbable to finalise an agreement by Sunday, it would be highly probable that we will continue the talks in the coming months,” a diplomat said, speaking on condition of anonymity. “The coming weeks don’t make much sense given it’s August. There will be a little break.”

The Western diplomat said the terms of the extension would be discussed in the coming days.

An extension of up to six months is theoretically possible according to an interim agreement Iran and the powers signed in November and began implementing in January. The interim deal gave Iran limited sanctions relief in exchange for curbing some atomic work.

“The idea is to keep the status quo,” the Western diplomat said. “The same terms as now. Nothing is decided and that will be the object of discussions in hours that come.”

Kerry said he had held several extensive conversations with Zarif since arriving on Sunday. They had a final short meeting at the Palais Coburg before Kerry returned to Washington.

Kerry will consult with President Barack Obama and Congress leaders about the prospects for a comprehensive agreement and the path forward if the July deadline is not met.

Zarif said: “We have made enough headway to be able to tell our political bosses back home that this is a process worth continuing.”

It was not immediately clear if the progress Kerry spoke of on Tuesday was enough to justify an extension.

A history of hiding sensitive nuclear work from U.N. inspectors has kept international suspicions about Iran’s nuclear programme high and heightened the risk of a new Middle East war should diplomacy fail to yield a long-term settlement.

Israel has threatened military action against Iran if it is not satisfied with the results of the talks.

In the New York Times interview, Zarif said any limits on Iran’s nuclear program should be lifted after three to seven years. But U.S. officials have said Washington would want verifiable limits to remain in place for more than a decade.