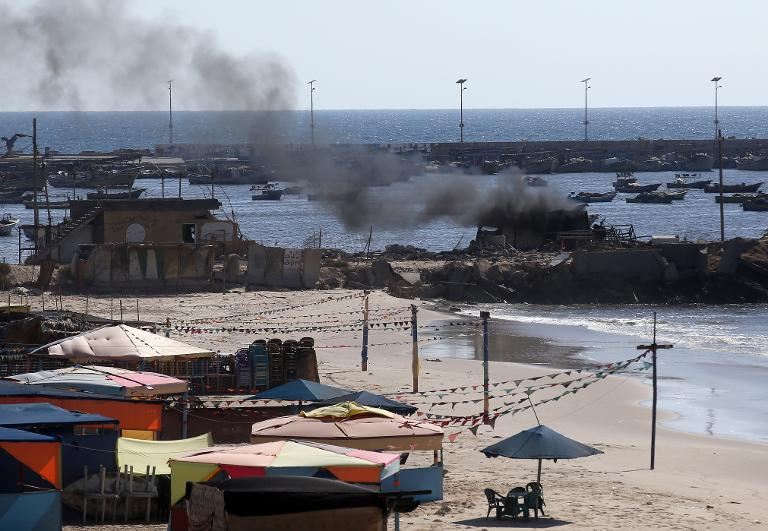 So far, Israel’s campaign, now in its ninth day, has killed 214 Palestinians, with a Gaza-based rights group saying over 80 percent of them were civilians.

In the same period, militants have fired more than 1,200 rockets at Israel, which on Tuesday claimed their first Israeli life.

Hamas said it had rejected the Egyptian truce efforts because it had not been included in the discussions.

The peace initiative continued on Wednesday, however, with a Hamas official holding talks with Egyptian leaders even as Palestinian president Mahmud Abbas also arrived in the Egyptian capital to join the diplomatic initiative.

In the latest violence, four children died and several were injured in Israeli shelling of a beach in Gaza City Wednesday afternoon, medics said.

The first strike hit at around 1300 GMT, prompting terrified children and adults on the beach to scatter. A second and third struck as they ran, setting fire to huts on the beach.

The strikes appeared to be the result of shelling by the Israeli navy against an area with small shacks used by fishermen.

Several children ran inside a hotel where AFP journalists saw at least three with shrapnel injuries.

They were evacuated by ambulances, which also picked up more injured people from the beach, including a man who had part of his leg torn off.

The four bodies were later taken to Abu Hasira mosque, near where the boys had died.

The boys, all from the Bakr family, were laid out, wrapped in the yellow flags of the Fatah party, in front of mourners.

Warplanes during the night struck about 40 sites across Gaza, among them political targets, as militants also kept up their fire on Israel’s coastal plain, with four rockets shot down over metropolitan Tel Aviv.

The Israeli military also dropped flyers and sent text messages warning 100,000 people in northeastern Gaza to evacuate their homes ahead of an air campaign targeting “terror sites and operatives” in Zeitun and Shejaiya, two flashpoint districts east of Gaza City.

An identical message was sent to Beit Lahiya in the north, echoing a similar army warning on Sunday, when more than 17,000 residents of the north fled for their lives, most seeking refuge in UN-run schools.

But for patients at Al-Wafa hospital in Shejaiya, many of whom are paralysed or in a coma, the warning simply provoked even more fear.

“We cannot leave our patients, they are helpless,” director Basman Alashi told AFP, saying most of them were completely incapacitated and in no position to be moved.

“There is no place safe in Gaza! If a hospital is not safe, where is?” he said as the sound of nearby shelling rattled the windows.

The Israeli warnings appeared to have had no immediate effect, with only limited numbers seen leaving. Children picked up many of the flyers and played with them, an AFP correspondent said.

“Where should we go?” asked Faisal Hassan, a father of five who lives in Zeitun.

Hamas dismissed the warning as a scare tactic, telling residents there was “no need to worry”.

“This is part of the psychological war, intended to disrupt the domestic front,” it said in a statement.

But Israeli President Shimon Peres insisted the warning was to protect the innocent.

“We’re trying to defend our own people, as we must, and we’re also trying hard not to hit innocent people in Gaza,” he said on meeting Italy’s top diplomat.

Prime Minister Benjamin Netanyahu on Tuesday vowed to step up the military campaign after Hamas dismissed an Egyptian ceasefire proposal, firing scores of rockets over the border despite the army holding its fire for six hours.

“This would have been better resolved diplomatically… but Hamas leaves us no choice but to expand and intensify the campaign against it,” he said.

Azzam al-Ahmad, a senior member of Abbas’s Fatah movement, said a Hamas official was in Cairo Wednesday to hold talks with Egyptian officials.

Ahmad said he hoped the talks in Cairo would “crystalise a definite formula for an Egyptian initiative” or clarify its plan, which had proposed an end to hostilities from 0600 GMT on Tuesday.

Abbas himself later arrived in Cairo to join the diplomatic efforts and was slated to travel to Ankara on Thursday in search of regional support for an immediate end to the fighting.

Blair told a media conference Egypt’s initiative was designed “to allow all the issues that are at the heart of this problem .. to be dealt with in a thorough and proper way.”