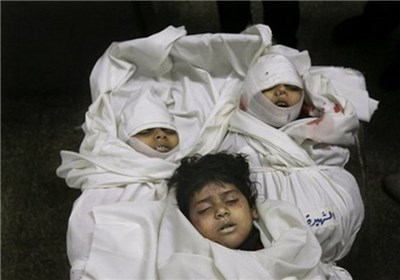 TEHRAN (Tasnim) – Thirty percent of the Gazans killed by Israeli offensive against the blockaded sliver are women and children, a report said.

The figure was announced according to a DPA count based on a list of names provided by Gaza’s Health Ministry spokesman Ashraf al-Qudra.

Nearly 200 people have been killed and more than 1,400 others injured by the new wave of Israeli aggression so far.

The death toll has already exceeded that of the 2012 offensive against the coastal enclave.

Israeli warplanes have been pounding targets in Gaza in Tel Aviv’s new round of offensive that began on July 8, Press TV reported.