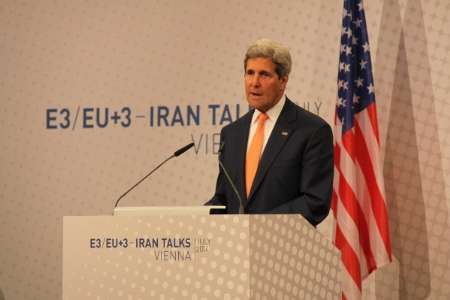 Vienna, July 15, IRNA – US Secretary of State John Kerry said Tuesday that after three rounds of talks in Vienna with his Iranian counterpart Mohammad Javad Zarif, he is going to fly back to Washington for consultations with President Barack Obama and US Congress over the next steps to be taken.

Speaking to reporters, Kerry said certainly there are ways to reach an agreement and that they will continue with their efforts.

There had been tangible progress in certain key points, even though differences over main issues still remain in place, he said.

The US secretary of state said, ˈI want to underline that our goals are not out of reach.ˈ

He said that during their talks in the past two days, he and Foreign Minister Zarif, discussed how to make sure that demands of Iran and the United States are being met.

ˈWe have to make sure that Iranˈs nuclear program is peaceful and will remain peaceful in the future.ˈ

He added that in his negotiations with his Iranian counterpart, they hadnˈt discussed the number of centrifuges.

The Supreme Leader last week specified the bottom line for the Iranian nuclear program and made clear the capacity of the centrifuges to enrich uranium in line with Non-Proliferation Treaty in addition to lifting the arbitrary sanctions which inflicted several hundered billion dollars damages on Iranian economy over the past three years.