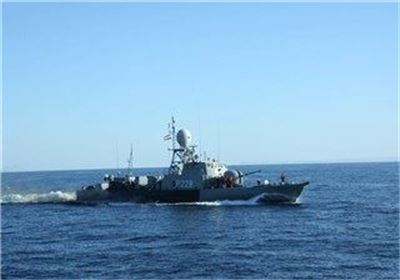 TEHRAN (Tasnim) – The Navy’s 30th fleet of warships rescued an Iranian oil tanker form a pirate attack off the coast of Oman on Sunday, commander of the force said.

Navy Commander Rear Admiral Habibollah Sayyari said on Monday that servicemen aboard the 30th fleet carried out the anti-piracy operation in an overseas mission in waters between Oman and Yemen.

He said the pirates, sailing 9 vessels equipped with light and semi-heavy assault weapons, were forced to flee the scene after the timely presence of Iranian forces.

According to the commander, it was the fourth confrontation between the 30th fleet and pirates in the international waters. In three other cases, Iranian ships have been rescued by the fleet, which also saved an Indian-flagged ship from pirate attacks.

Sayyari also noted that the 30th fleet berthed at the port of Salalah in Oman on Monday.

Comprised of “Alvand” destroyer and “Bushehr” logistic warship, the fleet was deployed to the international waters in April.

The fleet is planned to sail across the Gulf of Aden, the Red Sea, the Bab el-Mandeb Strait and the northern parts of the Indian Ocean as part of missions to protect the Iranian vessels against pirate attacks in various shipping routes.

In recent years, Iran’s naval forces have increased their presence in the international waters to protect naval routes and provide security for merchant vessels and oil tankers.