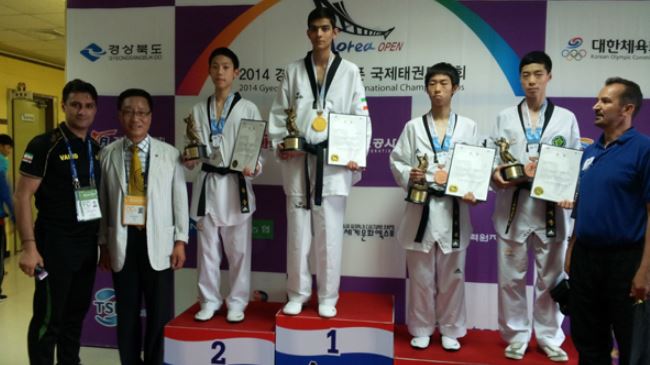 On Saturday, Iranian sportsman Mehdi Es’haqi snatched the junior gold medal in the minus 48-kilogram weight division after he managed to down his South Korean opponent 19-7 in the final encounter of the category  held at Gyeongju Indoor Stadium in the coastal city of Gyeongju, situated  370 kilometers (230 miles) southeast of the capital Seoul.

The young Iranian athlete had earlier overpowered South Korean and Mongolian taekwondo fighters in his march to the final.

Later in the day, Alireza Nasrazadani, who had defeated his South Korean rivals in the men’s minus 74-kilogram weight class, was brushed aside in the semi-final round of the competition following a stiff challenge from an Uzbek  competitor to grab a bronze for Iran.

Also on Saturday, the final bout of men’s minus 58-kilogram category was an all-Iranian affair between Farzan Ashourzadeh and Abolfazl Yaqoubi.

The taekwondo fighters were in a neck and neck race for best in the division, and ultimately Ashourzadeh overcame Yaqoubi 8-7 to bag the gold.

The 2014 Gyeongju Korea Open International Taekwondo Championships opened in the South Korean city of Gyeongju on July 11, and will wrap up on July 16.

A total of 1,770 athletes are taking part in the five-day international taekwondo tournament.