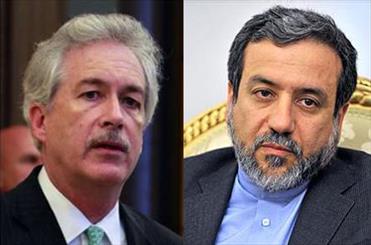 Seyed Abbas Araghchi and William Burns are on a meeting now in Austrian capital of Vienna following the 6th round of nuclear talks.

They are meeting to reach an agreement and start drafting the final nuclear text on Tehran nuclear program.

This round of talks, started on July 2 with Iran’s FM and EU’s foreign policy chief meeting in Vienna, has been ongoing between Iran and 5+1.

Negotiations were held on both deputy and foreign minister’s levels during the last days.

Iranian negotiators attended 6 rounds of political-level talks in addition to several expert-level talks on Tehran nuclear program based on the Joint Plan of Action signed between the two sides in November 2013 in Geneva.

According to the interim agreement, both sides have had a six-month time to reach a final agreement on Tehran peaceful nuclear program, which will end on July 20.

Nuclear talks of this round started on July 2 by Zarif and Ashton meeting in Vienna. Several sessions have been held on deputy-level to draft the final nuclear text.
On Sunday foreign ministers of four countries including US, UK, Germany and France joined the negotiations.

Iran’s foreign minister, EU foreign policy chief and US secretary of state held an intensive talk Monday night as the 13th day of Vienna talks was going on between Iran and P5+1.

An Iranian diplomat after the trilateral meeting said in Vienna that “although nuclear negotiations are formally held between Iran and 5+1 states – US, UK, France, Russia, China plus Germany – but what is for real is that the major parties to this game are Tehran and Washington.”