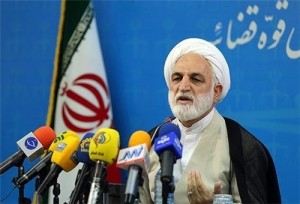 TEHRAN (FNA)- There is no Islamic State of Iraq and the Levant (ISIL) terrorist in Iran, Judiciary Spokesman Gholam Hossein Mohseni Ejei said on Monday, stressing the country’s full security.

“No one under the name of Daesh (ISIL) is operating in Iran,” Mohseni Ejei said in his weekly press conference in Tehran on Monday.

“Thanks God and due to people’s vigilance as well as the efforts made by the relevant officials and the forces who protect Iran, our country is in full security,” he added.

In relevant remarks in June, Iranian Deputy Interior Minister Ali Abdollahi stated that the country’s security forces have intensified measures along the country’s Western border with Iraq in a bid to prepare for any unexpected incident.

“Given the circumstances in certain neighboring countries and efforts by enemies of the Islamic Revolution to organize terrorist groups, it is all the more necessary to pay attention to borders,” Abdollahi told reporters.

Also last month, Iranian Interior Ministry Spokesman Hossein Ali Amiri announced that the country’s security and intelligence forces have full control over the Western borders with Iraq and are ready to foil any unexpected threat.

“There is no notable problem along our common border with Iraq,” Amiri said.

“However, the necessary measures have been adopted by the Interior Ministry and border police,” he added.