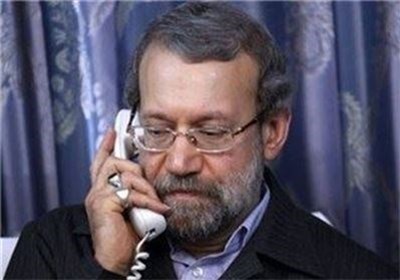 TEHRAN (Tasnim) – Iran’s Parliament Speaker called for an emergency meeting of the Parliamentary Union of Islamic Countries (PUIC), to discuss the ongoing crisis in the Gaza Strip.

Ali Larijani made the request in separate phone conversations with the Speaker of the National Assembly of the Republic of Mali Issaka Sidibé and Sudanese Parliament Speaker Fateh Ezzedin Mansour as the current and future chairmen of the inter-parliamentary troika.

The Iranian Speaker pointed to the critical humanitarian crisis in the Gaza Strip following brutal Israeli attacks on the coastal enclave and slammed international organizations and the claimants of human rights for their silence on heinous crimes of the Zionist regime.

“All the countries and nations particularly Muslim states should feel responsible to stop the atrocities and the barbaric acts of the occupying regime,” said Larijani, deploring Israel’s attacks on residential areas, hospitals, and mosques in Gaza Strip which have resulted in the killing of many defenseless Palestinians including women and children.

Larijani further emphasized the important role and responsibility of Islamic countries’ parliaments in the face of the current situation in the occupied Palestine and called for necessary measures to protect the defenseless Palestinians against the Israeli aggression.

Since July 8, more than 170 Palestinians have lost their lives in a series of Israeli air attacks targeting different parts of the besieged Gaza Strip.
In response to Israel’s deadly attacks, Hamas been firing retaliatory rockets from the Gaza Strip into Israel.

Some 1.7 million people in Gaza are deprived of their basic rights, such as freedom of movement, jobs that pay proper wages, and adequate healthcare and education.