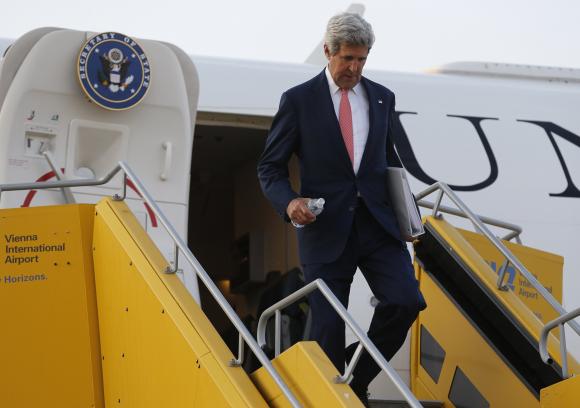 U.S. Secretary of State John Kerry leaves his plane at Vienna International Airport as he arrives for talks with foreign ministers from the six powers negotiating with Tehran on its nuclear program in Vienna, July 13, 2014.

(Reuters) – U.S. Secretary of State John Kerry on Sunday said that there were major differences between Iran and six world powers negotiating on Tehran’s nuclear program, remarks that were echoed by a senior Iranian negotiator.

“Obviously we have some very significant gaps still, so we need to see if we can make some progress,” Kerry said ahead of meetings on Iran with European Union foreign policy chief Catherine Ashton and other European foreign ministers who came to the Austrian capital to join the talks.

Kerry’s sentiments were echoed by a senior Iranian negotiator, Deputy Foreign Minister Abbas Araqchi, who was quoted by state television as saying that “disputes over all major and important issues still remain. We have not been able to narrow the gaps on major issues and it is not clear whether we can do it.”