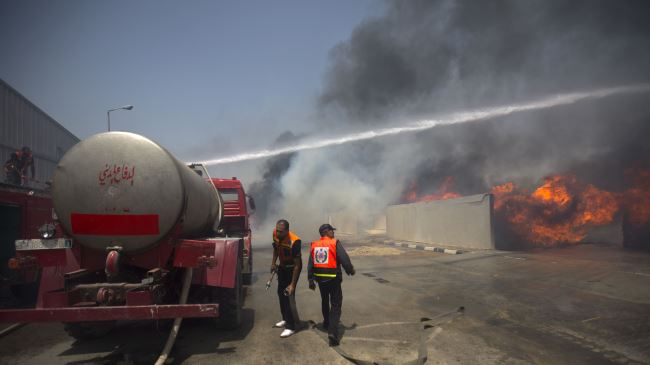 Palestinian firefighters try to extinguish a fire at a UN storehouse after an Israeli military strike in an area west of Gaza City on July 12, 2014.

A senior Iranian lawmaker has criticized Muslim governments for their silence on the Israeli regime’s atrocities against the Palestinian nation.

“Unfortunately, there is this bitter reality that Muslim countries…have remained silent vis-à-vis the Zionist regime’s strikes, but this silence is by no means acceptable and justifiable,” Alaeddin Boroujerdi, who chairs Iran Majlis’ Foreign Policy and National Security Committee, said on Saturday.

He added that the Iranian MPs have embarked on a diplomatic effort to convince Muslim governments to condemn and take action against Israeli crimes.

Boroujerdi said Israel has taken advantage of the ongoing crises in Syria and Iraq to press ahead with the killing of innocent Palestinians.

He also expressed regret that UN Secretary General Ban Ki-moon instead of condemning “the killing of innocent people” has largely denounced the acts of “self-defense by the Gazans.”

During an emergency meeting of the UN Security Council on Friday, Ban Ki-moon said, “Today we face the risk of an all-out escalation in Israel and Gaza with the threat of a ground offensive still palpable and preventable only if Hamas stops rocket firing.”

Palestinian resistance movement Hamas has warned that it is prepared to hit back at Israeli forces if the Tel Aviv regime launches a ground incursion into the coastal enclave.

The death toll from the five days of Israeli strikes on the Gaza Strip has risen to at least 130.

More than 900 people have been injured in the latest round of Israeli attacks on Gaza since July 8. Most of the victims have been women and children.