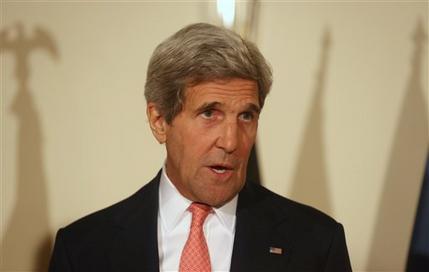 U.S. Secretary of State John Kerry, speaks, during a joint press conference in Kabul, Afghanistan, Saturday, July 12, 2014. U.S. Secretary of State John Kerry says both of Afghanistan’s presidential candidates are committed to abiding by the results of the “largest, most comprehensive audit” of the election runoff ballots possible. (AP Photo/Rahmat Gul)

VIENNA (AP) — U.S. Secretary of State John Kerry and other officials gathering in Vienna face a deadline only days away for a comprehensive pact preventing Tehran from developing nuclear weapons.

However, world powers and Iran appear set to extend the deadline to allow more time for negotiations.

Britain, France and Germany also sent their foreign ministers to Austria’s capital for talks over the next few days, as has Iran. But the top diplomats from China and Russia aren’t even bothering to show up, sending lower-ranking officials instead.

Kerry arrived Sunday in Vienna on the heels of diplomatic success in Afghanistan, where he persuaded rival presidential candidates to agree to a full audit of their recent runoff election. They also agreed to a power-sharing arrangement, whoever emerges victorious.

In Austria’s capital, the top American diplomat has perhaps a harder task.

Discussions center on imposing long-term restrictions on Iran’s uranium enrichment and even tighter rules against plutonium production – materials usable in nuclear warheads. In exchange, the U.S. and other powers would scrap a series of trade and oil sanctions against Tehran.

And in the United States, Republicans and fellow Democrats have threatened to scuttle the emerging agreement because it would allow Iran to maintain some enrichment capacity.

Outside the negotiation, regional rivals of Iran including Israel and Saudi Arabia are extremely skeptical of any arrangement that would, in their view, allow the Islamic republic to escape international pressure while moving closer to the nuclear club.

Iran says its program is solely for peaceful energy production and medical research purposes, though much of the world fears it’s a covert effort toward nuclear weapons capability.

An interim deal in January effectively froze in place Iran’s program, with world powers providing sanctions relief to Tehran to the tune of about $7 billion. In the agreement, they gave themselves until July 20 to reach a final accord, though it allowed for a further six-month extension if necessary.

With many issues left unresolved, officials with knowledge of the talks said an extension was seen as the most likely result over the following days. They spoke on condition of anonymity because they weren’t authorized to discuss the ongoing negotiations publicly.

Only last month, Kerry warned that time was running out. Iranian leaders, he said, faced a choice.

“They can agree to the steps necessary to assure the world that their country’s nuclear program will be exclusively peaceful,” Kerry said. “Or they can squander a historic opportunity to end Iran’s economic and diplomatic isolation and improve the lives of their people.”

On the sidelines of the nuclear talks, Kerry will face some tense talks with his European allies overs separate matters.

He is slated to speak later Sunday with the three foreign ministers about worsening violence in the Middle East, with each likely to push harder than the American for a cease-fire between Israel and Hamas.

Kerry plans to meet separately with Germany’s Frank-Walter Steinmeier to discuss a spiraling espionage dispute between the close NATO partners.

The relationship already was on rocky ground, given revelations the U.S. was intercepting Internet traffic in Germany and eavesdropping on Chancellor Angela Merkel’s telephone calls.