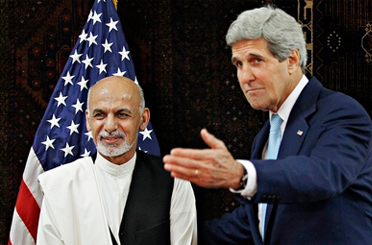 Kerry in Kabul to meddle in election row

TEHRAN, July 12 (MNA) – US Secretary of State John Kerry is in Kabul to talk election dispute with two presidential candidates.

Following the gridlock over run-off presidential election in Afghanistan after which both candidates claimed victory, John Kerry went to Kabul to talk the two contenders. US secretary of state and his aides met with Andullah Abdullah and Ashraf Ghani as well as with Hamid Karzai to discuss the situation. American officials also met with UN special envoy to Afghanistan Jan Kabis.

While the talks continue on Saturday, participants reject to reveal results of meetings behind closed doors. Kerry’s trip to Kabul comes as the majority of American forces are scheduled to leave Afghanistan by the end of 2014 and Afghans are to take full responsibility of their own country.

Preliminary results from the June 14 run-off vote put Ghani, a former World Bank official, in the lead by almost one million votes. Abdullah rejected the result, claiming widespread fraud and calling the outcome a “coup” against the Afghan people.