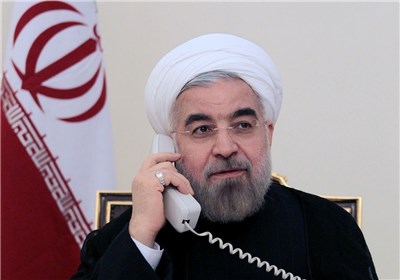 TEHRAN (Tasnim) – Iran’s president and Turkish prime minister in a telephone conversation strongly condemned Israel’s brutal attacks on the besieged Gaza Strip, and called for joint efforts to end the atrocities against the Palestinian people.

“We should all do something to make the Zionist regime (of Israel) realize that the Islamic world and the regional countries are supporting the Palestinian people and have not left them alone,” President Hassan Rouhani told Turkey’s Recep Tayyip Erdogan on Friday night.

“This cruel regime (Israel) should be mindful that it will receive the necessary response for the crimes it is committing,” Rouhani said.

Describing Iran and Turkey as “two of the great and influential Islamic countries in the region”, President Rouhani said Tehran and Ankara “bear a heavy responsibility” to support Palestine.

Erdogan, for his part, deplored the Israeli offensive on Gaza as “intolerable”, expressing his country’s preparedness for making collaborative efforts to end the military assaults on the enclave.

“Iran and Turkey can have a joint plan and cooperation in this regard, and we need to make the most of our capabilities and potential in this field,” he stressed.

Israel has launched a new wave of military strike on the besieged Gaza Strip after tensions raged between Palestinians and Israelis following the burning alive of a Palestinian teen in East al-Quds by Zionist settlers.

16-year-old Mohammed Abu Khdeir’s death has sparked a wave of protests across the Palestinian territories. Ever since, Israel has been pounding the blockaded enclave.

The death toll from Israel’s bombardment of Gaza has increased to over 120 since Tuesday. More than 900 Palestinians have also been injured in the Israeli attacks.

“We have received deeply disturbing reports that many of the civilian casualties, including of children, occurred as a result of strikes on homes,” said Navi Pillay, the UN high commissioner for human rights.