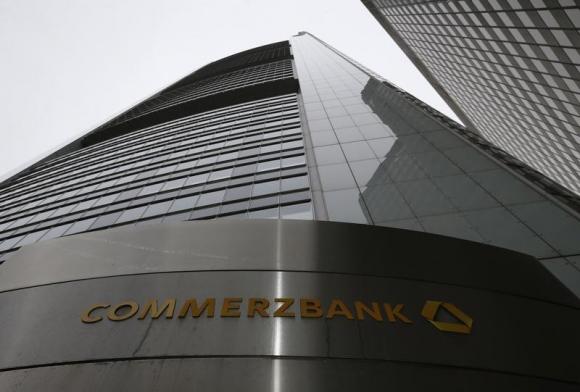 The headquarters of the Commerzbank AG is pictured before the bank’s annual news conference in Frankfurt February 13, 2014.

(Reuters) – German lender Commerzbank AG is expected to pay between $600 million (350.40 million pounds) and $800 million (467.21 million pounds) to resolve investigations into its dealings with Iran and other countries under U.S. sanctions, sources familiar with the matter said.

The penalty, previously reported to be more than $500 million, includes a demand from New York’s top banking regulator, Benjamin Lawsky, for more than $300 million from the bank, the sources said.

Other U.S. authorities, including the Department of Justice, the Treasury Department, the Federal Reserve and the Manhattan District Attorney, are also involved in the talks.

Among the violations being investigated are Commerzbank’s transactions for the Islamic Republic of Iran Shipping Lines, one of the sources said.

The state-sponsored shipping company was designated for economic sanctions by the United States in 2008 for allegedly supporting Iran’s proliferation of weapons of mass destruction. The source said Commerzbank was alleged to have done business with the company despite knowing that it was sanctioned.

A Commerzbank representative declined to comment on the allegations and the size of any settlement.

A settlement could be reached in the next few weeks, one source said.

The Justice Department, Manhattan DA’s office and the New York Department of Financial Services declined to comment. The other authorities could not immediately be reached for comment.

Over the past five years, more than half a dozen foreign banks have settled with authorities over sanctions violations. They forfeited more than $12 billion, according to Manhattan District Attorney Cyrus Vance.

For example, Standard Chartered Plc, which was accused of hiding 59,000 Iranian transactions worth $250 billion from regulators, paid $667 million to U.S. authorities in 2012.

One source said the number, volume and type of suspicious transactions at Commerzbank are in the same ballpark as those in the Standard Chartered case.

Like Standard Chartered, many of Commerzbank’s transactions involved Iran, according to one source. Violations involving Iranian entities can lead to lower penalties than sanctions against other countries such as Sudan. That is because until 2008, U.S. law allowed Iranian transactions that originated and ended outside the United States, even if they were cleared through a U.S. bank.

The U.S. inquiry into Commerzbank’s activities began in 2010. U.S. authorities have found that the bank stripped identifying information from incoming wires to avoid red flags that would have helped regulators police the transactions.

Commerzbank, which is 17 percent owned by the German government, is expected to enter into a deferred prosecution agreement that would suspend criminal charges in exchange for the financial penalty and other concessions, the sources said.

Though other penalties against Commerzbank have not yet been determined, one source said they were not expected to be severe and might include installing an independent monitor at the bank.

Commerzbank had 934 million euros ($1.27 billion) at the end of 2013 as provision for litigation risks, including the U.S. investigation.