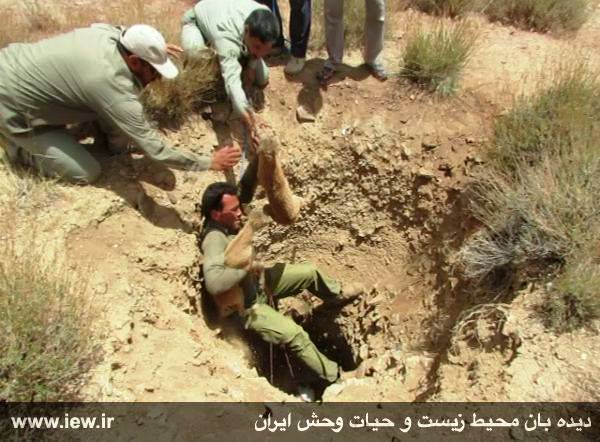 The lives of game guards: A struggle to protect Iran’s biodiversity

Recently while on patrol in the Dehaj area three guards noticed a wild female sheep behaving unnaturally. As they moved in to investigate where the cries were coming from, they discovered two little lambs. Photo credit: Iran Environmental Watch

It’s a job that can go unnoticed, and, to many it may seem ordinary. But it calls for extraordinary devotion and courage, as it could cost you your life.

Game guards – wardens of Iran’s wildlife and natural resources – work ceaselessly to protect the country’s biodiversity against tremendous odds. In recent years, more than 100 have been killed in armed conflicts with illegal poachers and hunters in national parks, protected areas, and forests.

Within Iran, more than 140 million hectares cover such protected areas that include the habitats of endangered animals, plant species, and other precious natural resources. According to global standards, one game guard is required for each 2000 hectares of land and 1000 hectares of wetlands. According to that yardstick, Iran needs 11,000 game guards to protect its rich biodiversity, but official statistics indicate it has only 3000.

To help bridge that gap the Iranian Department of Environment (DoE) and the United Nations Development Program (UNDP) have been working closely to preserve and protect endangered species, such as the Asiatic Cheetah. This joint cooperation has included training workshops for game guards to provide them with vital skills to operate more efficiently on the job.

To cite only one example, UNDP and the DoE have jointly held 37 workshops in the 10 protected areas under the joint Conservation of the Asiatic Cheetah Project (CACP) from 2008 until now to improve the skills of Iranian game guards. In addition, during the past three years, three educational- recreational tours have been held for the game guards and their families to enhance their morale and welfare. This is to say nothing of the annual award ceremonies in the past five years.

The game guards’ jobs cover the remotest parts of Iran, and they sometimes go beyond the call of duty, to ensure the survival of Iran’s wildlife.
Iran’s Wildlife

Recently while on patrol in the Dehaj area three guards, Mohammad Sharifi, Hamid Khajouee, and Ahmad Shojaee noticed a wild female sheep behaving unnaturally. When they approached closer to where she stood, they heard what they said sounded like desperate cries. As they moved in to investigate where the cries were coming from, they discovered two little lambs that had fallen into a well accessible only through a tiny opening.

Using a rope, one of the game guards lowered himself down through that tiny opening. It was a struggle to navigate down and then back up – but after an hour both lambs had been rescued. After ensuring they were unhurt they set free, back to the safety of their mother who was standing nearby throughout the rescue.

Given such ongoing challenges and the fact that so many game guards have died in the line of duty, the Government of Iran is working to put into place stringent laws to improve protection of these areas, as well as to protect the lives of game guards.

One of the objectives of the DoE, in line with Iran’s global environmental commitments and the Millennium Development Goals (MDGs), is to increase the surface of protected areas and safeguard valuable ecosystems. The number of protected areas in Iran now exceeds 200 and covers a surface of more than 16,000,000 hectares, which is close to the global standard of 10% of the country. Iran’s global environmental commitments call on the country to increase this to 17% by the year 2017.