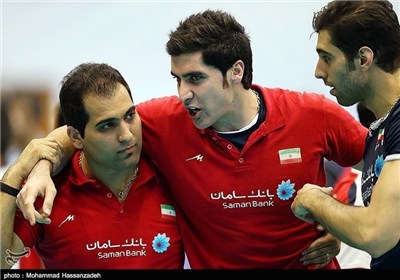 TEHRAN (Tasnim) – Shahram Mahmoudi of Iran has been ruled out of the 2014 FIVB World League due to injury.

The Iranian star suffered a twisted ankle in the match against Poland in the sixth week of the 2014 FIVB World League on June 30 in Tehran.

He failed to travel to Poland due to injury, where the Iranian team suffered two defeats.

“MRI scan showed signs of swelling on his ankle. We will do our best and hopefully he will be fit for the competitions,” Siamak Afroozi, the doctor of Iran’s volleyball team said.

Iran will play giant Brazil and Russia in Pool I of the FIVB Mens’ Volleyball World League’s final six, which will start from July 16 at the Nelson Mandela Forum in Florence, Italy.