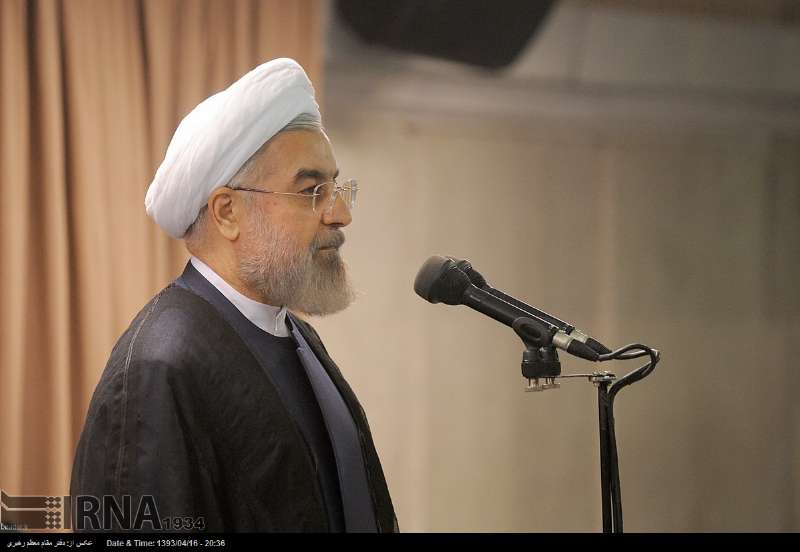 TEHRAN (FNA)- Iranian President Hassan Rouhani expressed the hope that the world powers would take lesson from their past mistakes, and warned that any failure in the talks underway in Vienna between the two sides will be blamed on the West for its excessive demands in the negotiations.

“We have a win-win strategy but if the enemy raises excessive demands, the world will know that the side which has raised excessive demands should merely be blamed for the possible failure of the negotiations,” Rouhani said in a meeting with Supreme Leader of the Islamic Revolution Ayatollah Seyed Ali Khamenei in Tehran on Monday night.

He said that the world public opinion is now completely aware that Iran has acted peacefully and transparently in developing its nuclear program and there is no more pretext for making allegations about the nature of Iran’s nuclear activities.

Stressing that no power can any more impose unjustifiable sanctions against Iran under the pretext of fighting Weapons of Mass Destruction (WMDs), President Rouhani said, “The wall of sanctions has sustained a major crack and the government is serious about continuing the negotiations.”

Iran and the Group 5+1 (the US, Russia, China, Britain and France plus Germany) started their 6th round of nuclear talks in Vienna early last week. The talks have no time limits and can continue by July 20, the deadline predicted in the interim Geneva deal struck between the two sides in November, until reaching a comprehensive final agreement to settle disputes over Tehran’s nuclear program.

Before starting the talks, Iranian Foreign Minister Mohammad Javad Zarif reiterated Tehran’s determination to reach a final deal with the powers, but stressed that Iran won’t accept any excessive demands by the world powers.

“This round of negotiations will be the last stage of talks by July 20 (the deadline envisaged in the interim Geneva agreement) and we will strive to reach an agreement at this stage,” Zarif said.

Asked about his team’s reaction if the world powers repeat their excessive demands in the talks, he said, “Naturally, if we are faced with excessive demands, this will be an obstacle to the progress in the negotiations and we won’t accept them.”