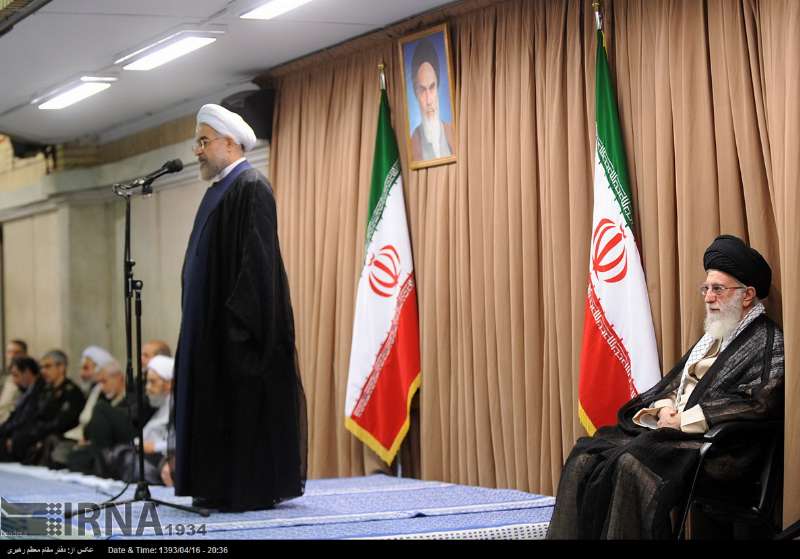 The Supreme Leader gave a vote of confidence to the Rouhani Government on Monday, maintaining his support for its nuclear negotiations with the 5+1 Powers.

Meeting Iran’s top officials — including President Rouhani — in a Ramadan ceremony, Ayatollah Khamenei said, “Let everyone know that I support and approve of the Government of Mr. Rouhani. I do my best to help the Government and I trust its high-ranking officials.”

The Supreme Leader continued, “We trust the (nuclear) negotiating team. They will not allow encroaching upon the nation’s rights.”

Iran and the 5+1 (US, Britain, France, Germany, China, and Russia) are entering the seventh day of a marathon discussion session in Vienna, seeking a comprehensive nuclear agreement before the July 20 expiry of an interim arrangement.

While maintaining his support for President Rouhani’s approach, given last autumn because of Iran’s economic crisis, the Supreme Leader again put out rhetoric of defiance — with special words for the US:

The reason for the US’s prevention (of an Israeli attack against Iran) is that (it) does not see the attack affordable and we also strongly emphasize that a military attack on the Islamic Republic is not affordable for any one….

The enemy’s hand is empty in both fields of sanctions and (military) threats.

Referring to specific points of contention in the nuclear discussions, the Supreme Leader not only defended Iran’s insistence on an expansion of its stock of 19,000 centrifuges for uranium enrichment but called for a nine-fold increase to 190,000 units.

He said any demand to close Iran’s second enrichment facility at Fordoo is “laughable”.

Ayatollah Khamenei called on the Government to bolster Iran’s position — in the event of either success or failure in the nuclear talks — through development of the “resistance economy”.

In a judgement last week, the court challenged the EU’s contention that NITC was “effectively controlled by the Government” and had provided “financial support to the Government through its shareholders which maintain ties with the Government”. It accepted the NITC’s denial, concluding there was not the “slightest evidence” for the allegations.

The court also removed an asset freeze on Sharif University of Technology, imposed for “providing support to Iran’s proliferation of sensitive nuclear activities” with the claim that laboratories were used by two firms sanctioned by the United Nations and the EU.

The court said that the EU “committed a manifest error of assessment and failed to discharge the burden of proof which rests on it”.

The annulments are the latest in a series of dismissals by the Court of specific European sanctions against Iranian individuals and companies.

Journalist Saba Azarpeyk has contacted her mother for the first time since her detention in late May.

Azarpeyk was arrested in a raid of the offices of the Tejarat Farda weekly. She is accused of “propaganda activities against the regime”.

The detention has been denounced in a statement by 147 journalists, who called on the Intelligence Ministry and Iran’s Press Office to secure Azarpeyk’s immediate release.

A group of MPs have withdrawn their call to impeach Science and Technology Minister Reza Faraji Dana after he promised to address their concerns, in a meeting that also included Speaker of Parliament Ali Larijani and the Presiding Board of the Majlis.

The MPs have been angered by the Rouhani Government’s easing of restrictions on the university sector, with appointments of new university presidents and the return to campus of students and professors expelled and dismissed under the Ahmadinejad administration.

Hundreds of professors had written to Larijani to protest the attempted impeachment.

ISNA reports that 108 of Iran’s 251 civilian airplanes are currently grounded because of sanctions, economic restrictions, and a lack of spare parts.

The 5+1 Powers had agreed in November’s interim nuclear agreement to ease restrictions on provision of spare aircraft parts.

However, Iranian officials claim that the bans are still in place and that some European countries are still refusing to provide fuel to Iran’s planes.

Head of Basij Militia: US Sending Ex-Guantanamo Detainees to Fight in Iraq Alongside Islamic State

The head of the Basij militia, Mohammad Reza Naqdi, claimed on Monday that the US has sent former “War on Terror” detainees from Guantanamo Bay to Iraq to fight alongside the Islamic State.

Addressing clerics and scholars in western Iran, Naqdi explained, “Those who have given up their belief in the US Guantanamo prison under hard torture and extreme psychological pressures are today committing crimes in Iraq alongside the Islamic State members, operating as US mercenaries without being paid.”

The Basij head also warned Iraqi Kurdish leaders that, if they pursued a referendum on independence, they will be assisting “Baathists” who attacked Kurdistan in 1988 with chemical weapons.

Speaking with Mehr News Agency, Alan Eyre, the US State Department’s Persian-language spokesperson, has insisted, “We are not thinking about extending the interim (nuclear) agreement. We are only focused on reaching a deal by July 20, 2014.”

Eyre’s line is similar to that taken by Western diplomats who have said any talk of an extension distracts from the priority of completing a comprehensive settlement in talks in Vienna.

Eyre also addressed reports that Foreign Ministers would soon join the discussions, which are in their seventh day: “We have always said that we will make every effort to reach an agreement, and if we feel that the presence of Secretary (of State John) Kerry would help the situation, he will come to Vienna.”

The Chinese agency Xinhua, citing an unnamed “diplomatic sources”, said yesterday that “some Foreign Ministers” are expected to join the talks by Friday.