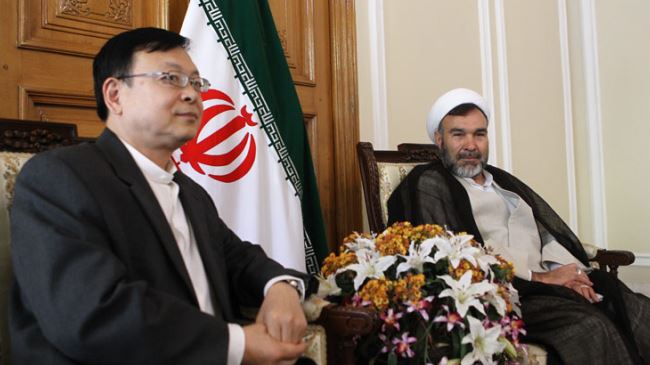 An Iranian lawmaker says Iran and China play an effective role in maintaining stability and peace in the Middle East.

“Cooperation between Tehran and Beijing, as two influential powers in Asia, is very useful and constructive in establishing sustainable stability and peace in this continent, particularly in the sensitive Middle East region,” member of the Majlis Presiding Board Hossein Sobhani-Nia said in a Monday meeting with Chinese Ambassador to Tehran Pang Sen.

He added that Iran and China have a common stance on different regional and international issues.

The head of Iran-China parliamentary friendship group further assessed as good, lasting and progressing the relations between the two countries and called on both sides to make use of their great capacities to improve ties in all fields.

Sobhani-Nia also voiced Iranian Majlis’ support for the strengthening of cooperation with China in political, economic, parliamentary and regional fields.

The Chinese envoy, for his part, said Iran is an important and powerful country in the region, adding that his country is determined to expand all-out relations with Tehran.

He added that the two countries have similar stances on regional and international developments, which prepare the ground for bolstering cooperation.

On March 3, Director of the Trade Promotion Organization of Iran Valiollah Afkhami-Rad said Tehran and Beijing plan to raise their annual trade to USD 200 billion in 10 years.