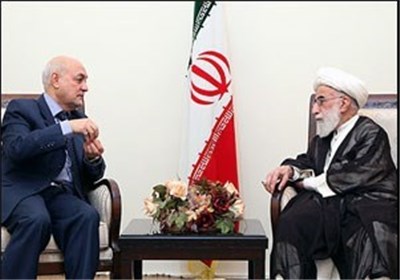 TEHRAN (Tasnim) – Secretary of Iran’s Guardian Council underlined that neighboring Iraq will be able to weather the crisis it has been beset with recently under the aegis of the Arab country’s religious leadership.

“The Iraqi nation and government can overcome the problems under the auspices of Marja (religious leadership),” Ayatollah Ahmad Jannati said in a meeting with Iraq’s Ambassador to Iran Mohamed Majed Abbas al-Sheikh in Tehran on Monday.

The Iranian cleric also voiced concern about the ongoing situation in Iraq in the wake of an offensive by the foreign-backed insurgents, and hoped that tensions would ease as soon as possible so that Iraqis will enjoy calm and security.

Since June 10, Iraq has witnessed a fresh wave of violence fueled by the Takfiri terrorists. Violence in Iraq escalated last month after militants from the Islamic State in Iraq and the Levant (ISIL) terrorist group took control of large swathes of the Arab country.

Elsewhere in the meeting, the Iraqi ambassador briefed Ayatollah Jannati on the latest developments in his country, stressing that there is no shortage of military equipment or armed forces in Iraq to deal with the militancy.

In a sign of the influential role of religious leaders in helping Iraq to tackle the crisis, the Iraqi officials explained that equations dramatically changed in favor of the Iraqi nation after the Arab country’s top Shiite cleric Grand Ayatollah Ali al-Sistani issued a religious decree, which spurred some 3 million Iraqi people to volunteer for the fight against Takfiri militants.

Back in June, Supreme Leader of the Islamic Revolution Ayatollah Seyed Ali Khamenei had also highlighted the role of the Iraqi religious authorities in thwarting the turmoil that is believed to be orchestrated from outside Iraq.

“We are vehemently opposed to interference by Americans and others in Iraq’s internal affairs and do not endorse it, because we believe the Iraqi government and nation and the country’s religious leadership (Marja) have the capability to end this sedition and will do that by the grace of God,” Ayatollah Khamenei stated on June 22.