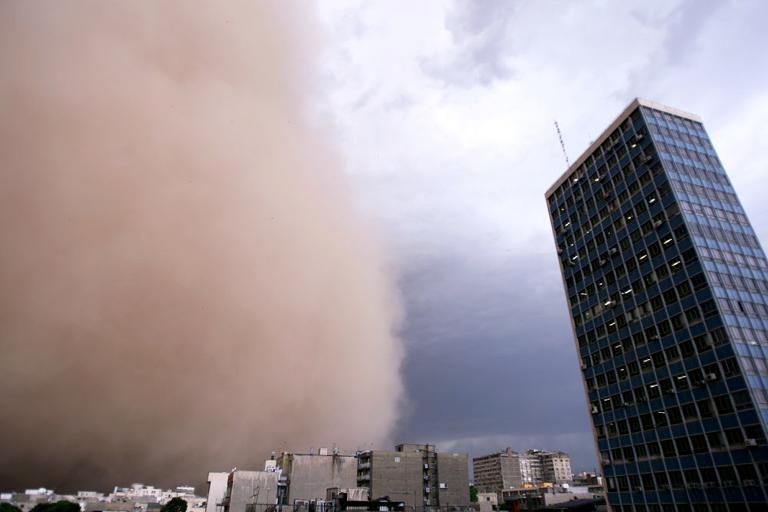 “The capital city experienced its worst dust-related pollution during July 2-3. The amount of dust in the air was considerably high and remained unchanged for two days,” according to the committee’s statement. It also cited mining activities near Tehran as the cause of the recent dust pollution.

In an interview with the English-language paper ˈIran Dailyˈ published Monday,

Prof. Parviz Kardavani, the father of Iranian desert studies, however presented another reason for the massive dust storm, saying that the recent dust storms could have entered from sub-Saharan Africa, Jordan and Iraq.

Rejecting the role of mining activities in producing such a massive dust storm in Tehran, Kardavani said mines have been always active near the capital city and are partly to blame for small particulates in the air.

However, he said, the dust storm that covered the city during July 2-3 was an unprecedented event, which could not have been created by industrial mines.

“The recent, massive dust storm had originated abroad,” he said, referring to wind direction as the reason.

“Wind blows from west to east and knowing that dust particles also affected the provinces of Qazvin and Alborz, which are located to the west of Tehran, we cannot blame mine-related pollutants as the source of last week’s dust pollution,” he said.

Kardavani also elaborated on how dust storm travels from the African Continent, Jordan and Iraq to Iran.

“Generally, there are two types of storms: one is sandstorm, which cannot travel long distances because of being very heavy,” he said.

The expert put the average height of dust storms at between 900 and 1,800 meters and said reports by pilots indicate dust storms could even reach an altitude of around 5,000 meters.

“Dust storms are usually witnessed during summer and spring,” he said.

He noted that provinces located in western Iran, including Khuzestan, Ilam and those near the border of Iraq, are mostly affected by the natural phenomenon.

Kardavani blamed the intensified dust storms over the past seven to eight years in Iran on the activities of regional countries.

“The construction of dams in Turkey and Syria, and controls on regional rivers to preserve water resources have led to the expansion of infertile lands,” he said, adding that dusts, which arise from arid lands, start travelling to Iran with the start of spring.

Kardavani also said the water-level of Tigris and Euphrates rivers, which supply the wetlands located along Iran-Iraq border, has declined drastically in recent years, which increased dust storms affecting the county.

To combat dust storms and prevent further environmental and economic losses caused by the phenomenon, Kardavani said, “As per an agreement, 1 million hectares of lands in Iraq would undergo afforestation in collaboration with Iran.”