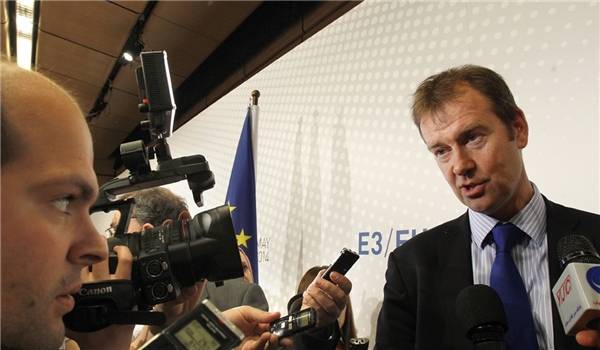 TEHRAN (FNA)- Michael Mann, the spokesman for the EU Foreign Policy Chief Catherine Ashton, voiced satisfaction in the outcomes of this morning talks between senior Iranian negotiator Seyed Abbas Araqchi and Ashton’s Deputy Helga Schmidt in Vienna, saying the talks have been “difficult but constructive”.

The sixth round of talks between Tehran and the Group 5+1 (the US, Russia, China, Britain and France plus Germany) headed by Iranian Foreign Minister Mohammad Javad Zarif and Ashton officially started in Vienna this week.

The Iranian foreign minister also attended a tripartite meeting with Ashton and US Deputy Secretary of State William Burns.

On Friday, Iranian and EU officials in a meeting in Vienna held another round of talks on drafting a final agreement between Tehran and the G5+1 over the former’s nuclear program.

During the meeting in the Austrian capital, Araqchi and Schmidt started bilateral consultations on the final deal.

On Thursday, Araqchi rejected some media reports about a reduction in the number of centrifuges that Iran has demanded to have during the talks with the G5+1.

Also in a video message on the eve of a new round of talks with the six world powers on Wednesday, Zarif asked his counterparts from the sextet not to miss the present opportunity for striking a deal with Iran and putting an end to an unnecessary crisis.Iran and the Group 5+1 sealed an interim deal in the Swiss city of Geneva on November 24, 2013 to pave the way for a full resolution of their decade-old dispute over the former’s nuclear standoff with the West. The deal came into force on January 20.