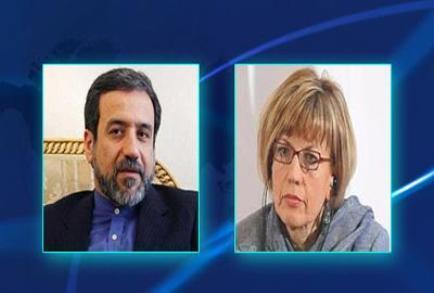 Vienna, July 4, IRNA – On 3rd day of Vienna 6 nuclear talks between Iran and six world powers drafting of the text of comprehensive agreement between the 2 sides began here Friday morning in a meeting between Abbas Araqchi and Helga Schmidt.

The meeting between the Iranian Deputy Foreign Minister for Legal and International Affairs Araqchi and the Deputy EU Foreign Policy Director Schmidt began at 9 am Vienna time (11:30 Tehran time) in Viennaˈs Coburg Hotel, where the seven countriesˈ negotiating delegations reside.

The last round of Iran-5+1 Group (comprised of the UN Security Council big 5 and Germany) before the July 20 deadline for the end of the Geneva Agreement, is aimed at achieving a comprehensive nuclear agreement between the two sides.

This round of talks had started on Wednesday with bilateral and multilateral meetings, as well as general meeting of the entire participating delegations in the Austrian capital city and is going to be the longest one of its kind with an 18-day duration.

Araqchi had earlier in a Thursday meeting with Iranian reporters in Vienna predicted that completing the drafting of the comprehensive nuclear agreement that had started in the course of the Vienna 5 negotiations would begin on Friday in a meeting between him and Ms. Ashtonˈs deputy.

ˈDuring the course of the past two days the negotiations were aimed at evaluating the two sidesˈ stands and reviewing what we have achieved thus far, in whose course both sides tried to comprehend more precisely the concepts and stands of each other,ˈ said the Iranian deputy foreign minister.

Araqchi said that during the previous round of negotiations a text has been prepared, but almost in all its paragraphs there are differences of opinion between the two sides and there is still therefore lots of work to be done to proximate the viewpoints in several meetings before the final text could be drafted and agreed upon.

ˈEvery delegationˈs efforts are aimed at using the remaining time before the July 20 deadline to finalized the final agreement,ˈ said Araqchi who is meanwhile the spokesman of the Iranian nuclear delegations.

Araqchi meanwhile rejected as baseless the speculations on the acceptance of new limitations by the Iranian delegation during the course of the Vienna 6 negotiations, including on decreasing the number of the active Iranian centrifuges, arguing that such news are fabricated by antagonist media, ˈaimed at disturbing the positive atmosphere of the negotiations.ˈ

ˈThe whole statistics and figures broadcasted on the centrifuges are the result of brain work of some foreign media and individuals with certain intentions, aimed at polluting the atmosphere of the negotiations, and tension building to deviate the talks from their intended objectives,ˈ said the Iranian deputy foreign minister.

It was announced in Vienna right before the beginning of the Araqchi-Schmidt Friday meeting that their talks were briefly delayed due to both sidesˈ need for further consultations with their higher officials.