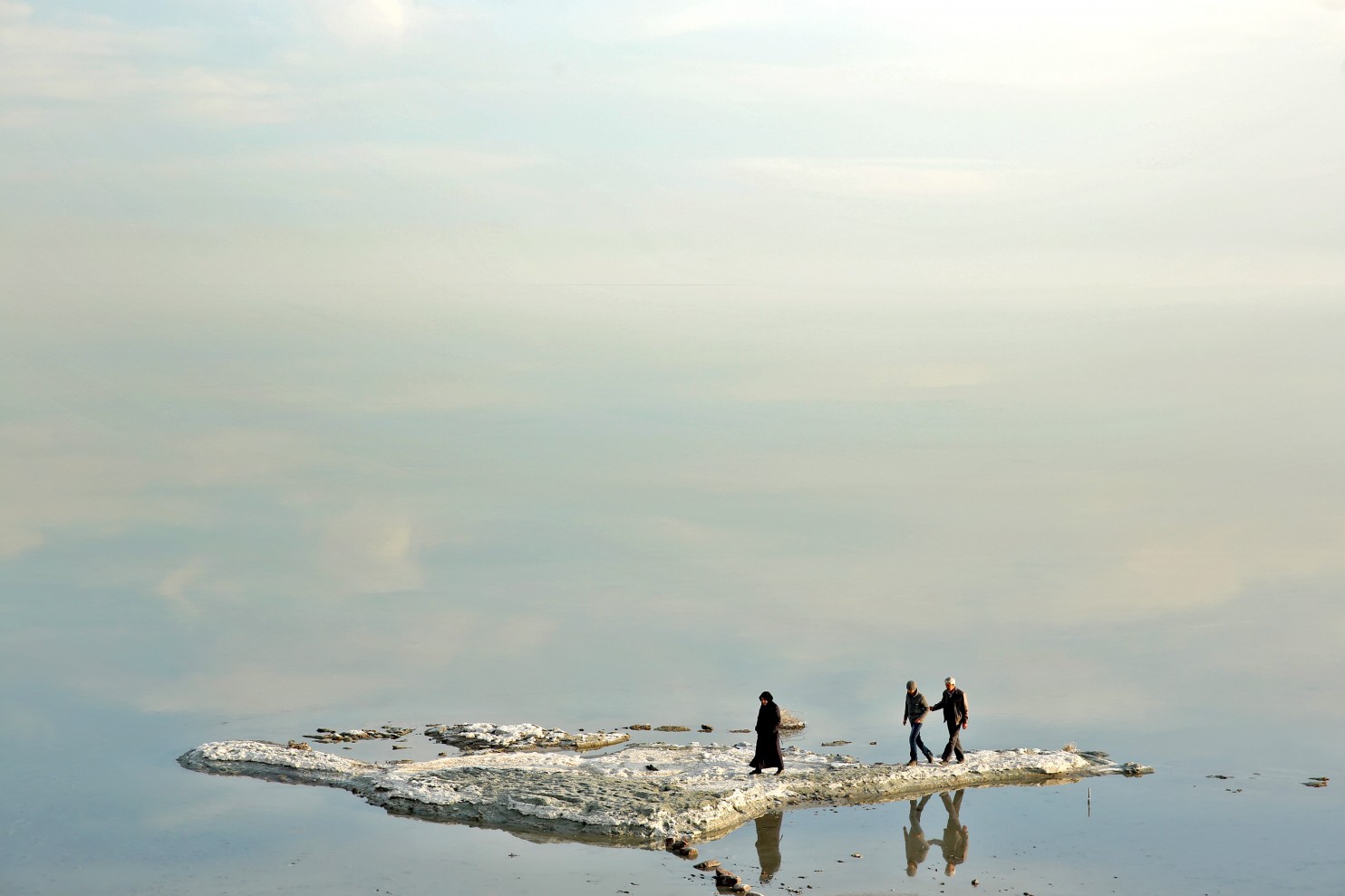 Iran’s water crisis the product of decades of bad planning

Visitors walk on salt-covered rocks that were once deep underwater at Lake Oroumieh in northwestern Iran. (Ebrahim Noroozi/AP)

TEHRAN — Iran is headed for a water shortage of epic proportions, and little is being done to reverse a decades-long trend that has reduced the country’s water supply to crisis levels.

Changes in the global climate, a century of rampant development and heavy subsidies on water and other utilities are all contributing to a situation that is likely to get much worse.

“Our water usage is twice the world standard and considering the situation in our country, we have to reduce this level,” Massoumeh Ebtekar, a vice president and the head of Iran’s Department of Environment, said in a recent speech.

Currently Iranians use on average 250 liters of water per day each day. Comparatively, Iranians uses much less water than residents of the United States, who lead the world using nearly 400 liters per day, but Iran and other dry Middle Eastern countries do not enjoy the abundance of fresh water sources of the Americas or Europe. Accurate data for Iran’s neighbors Iraq and Afghanistan is not available, but other countries in the Persian Gulf, including Saudi Arabia and the United Arab Emirates, consume water at levels similar to Iran, although their populations are much smaller.

With Iran’s annual precipitation only at a third of the global average, heavy overconsumption has ravaged the country’s available water resources. A 2013 study by the World Resources Institute ranked Iran as the world’s 24th most water-stressed nation, putting it at extremely high risk of future water scarcity.

Water use and consumption

While Iran has several large desalination projects, and even plans to sell some of its water to neighboring countries, converted saltwater is only seen as solution for areas close to the country’s two main saltwater sources, the Caspian Sea and the Persian Gulf, as the transportation costs of moving the water to the remotest regions of Iran are too high.

Throughout Iran, landscapes are being transformed as scientists warn that the already arid country runs the risk of becoming a vast desert.

Urmia, a salt lake in Iran’s northwest, which was once the largest in the Middle East, has been depleted to just 5 percent of its former volume over the span of only two decades. The Zayandeh river, which flowed Iran’s heartland, is mostly a dry bed, as it has been diverted and dammed to provide irrigation for farms throughout the country.

Disappearing lakes and dried up rivers are the outward symptoms, but the root causes are less visible, stemming from the techniques and habits of a more traditional and less mechanized era.

“In less than 50 years, we’ve used all but 30 percent of our groundwater supply, which took a million years to gather and it’s getting worse and worse due to unsustainable development,” said Nasser Karami, an Iranian physical climatologist who is currently an associate professor at the University of Bergen in Norway.

Iran’s population has more than doubled since the 1979 revolution and grown eightfold since 1900.

After six years of below-average rainfall, few Iranian authorities acknowledge the depth of the problem, instead offering quick fix solutions that do little to address the looming long-term impact on Iran’s climate and landscape.

“I have repeated it several times, that if water consumption in Tehran is managed and controlled we will not need rationing this summer. If people reduce their water consumption by just 20 percent there won’t be any need for action,” Seyed Hossein Hashemi, the Tehran governor, said on June 20 in an interview with Jahan News.

In recent days, the city of Karaj, a sprawling suburb of Tehran with 1.6 million inhabitants, implemented a rationing plan. Other major cities seem certain to follow suit in the coming days.

For a society that has become accustomed to heavily subsidized utilities including water and has never been given proper education on managing its natural resources, convincing Iranians to make adjustments will be challenging.

“We don’t realize that we’re making life for the future impossible for our own uses today. We shouldn’t only think about living comfortably today at the expense of tomorrow,” Karami said.

Among the symptoms of Iranians’ disregard for water conservation are unregulated gardening taps in public parks that flow for hours on end; the widespread practice of hosing down hot and dusty concrete to cool it down; and faucets that are habitually left running in kitchens around the country.

Environmental experts say that any solution will need to extend beyond conservation to include a long-term strategy to reverse the damage done to groundwater supplies in recent years.

“We’ve over exploited our groundwater, which is sort of a hidden water resource. People believe they can use it as though there is an unlimited supply. We are in a severe drought, but we could have prevented these kinds of problems, or least come up with a better plan,” said Mehdi Mirzaee, a professor of water resource management at Tehran’s Islamic Azad University.

Iran’s water problems go far beyond the everyday consumption habits of its nearly 80 million citizens. Agricultural use, which accounts for 90 percent of Iran’s water usage according to statistics released by the Islamic republic’s Environmental Protection Organization in May, is also in need of massive reform. State estimates put the amount of water wasted in agricultural irrigation at 60 percent.

“Going back 3,000 years, our ancestors knew where to grow, where not to and how to use water and irrigate their land wisely. But we have put aside all their valuable experiences and ruined lands and water resources by digging wells, diverting water and creating and abandoning dams,” Bijan Farhang Darehshori, an Iranian environmental activist, said.