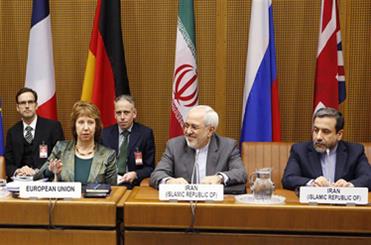 TEHRAN, July 2 (MNA) – Post Zarif, Ashton bilateral meeting as a prologue for Vienna 6 talks, representatives of Iran, US and EU have held a trilateral meeting.

Mohammad Javad Zarif Iran’s foreign minister, Catherine Ashton EU’s foreign policy chief and Willliam Burns US Deputy Secretary of State met in Vienna after a meeting between Zarif and Ashton ahead of the 6th round of political-level talks about Tehran nuclear program.

Iranian delegation left for Vienna today, Wednesday morning to hold a new round of talks with the world major power – US, UK, France, Russia, China plus Germany; the last round of such talks in Vienna had little progress.

Zarif has already said Iran is determined enough to reach comprehensive solution agreed by both sides, “such agreement needs both sides’ commitment though.”

Iran’s FM did not attend a working lunch session for the coincidence of the negotiations with the holy month of Ramadan.

In the previous round of political-level talks in Vienna Iran and the 5+1 group made little progress in building on the landmark interim nuclear deal they clinched last November in Geneva and did not reach the point to start drafting a final deal.