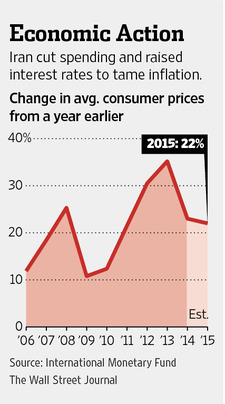 TEHRAN—The man tasked with engineering the recovery of Iran’s economy must do so from atop a central bank that is incapable of conducting financial transactions with most foreign governments and companies.

Called out of academia last year by the newly elected President Hasan Rouhani, Mr. Komijani says he was shocked by the state of the government’s finances, which had deteriorated dramatically during former President Mahmoud Ahmadinejad‘s tenure.

“The sanctions were a catalyzer that exposed many other problems in our economy,” said Mr. Komijani in an interview at Bank Markazi’s gleaming Tehran office tower, which looks up at the snow-capped peaks of the Alborz Mountains. “By July 2011, the sanctions really started to have an impact.”

Mr. Komijani was named to oversee operations at Bank Markazi last August by President Rouhani, who has set out with a group of advisers to rebuild Iran’s economy amid sanctions and after the policies of President Ahmadinejad.

The firebrand former president, famous for his threats against Israel and his anti-Western vitriol, made huge financial commitments to public housing and poverty-alleviation programs at the same time international sanctions were drastically constricting Tehran’s ability to sell oil.

The sanctions the Obama administration placed on Bank Markazi blocked the institution from conducting financial transactions with virtually any foreign bank and drastically cut Tehran’s ability to repatriate most oil revenues. The central bank was also kicked out of the electronic banking system, known as the Swift network, which manages most international financial transactions from its offices in Belgium.

Mr. Komijani, who had earned his Ph.D. in economics from the University of Wisconsin in 1983, had served in senior posts at Bank Markazi during the presidency of the reformist cleric, Mohammad Khatami, which ended in 2005. But like many of that president’s aides, Mr. Komijani was purged for ideological and political reasons after the hard-line President Ahmadinejad took office. The economist took up a position teaching at the University of Tehran.

When he was brought back by Mr. Rouhani, the deputy governor and other members of the economic team responded by cutting many of Mr. Ahmadinejad’s programs and sharply raising interest rates in an effort to shore up the rial and tame inflation. Mr. Rouhani’s government also began attempting to reclaim what are estimated to be tens of billions of dollars in funds that disappeared from the government’s books during Mr. Ahmadinejad’s tenure, some as a result of rampant oil smuggling that took place as Western sanctions increased, according to Iranian officials.