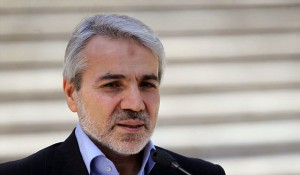 TEHRAN (FNA)- Iranian Government Spokesman Mohammad Baqer Nobakht underlined close and brotherly relations between Tehran and Baghdad, and said the Iranian government will help Iraq in its fight against terrorists according to agreements.

“We will cooperate with the new Iraqi government and will provide it with proper and agreed aid in fighting terrorism,” Nobakht told reporters in a press conference in Tehran on Wednesday, but he did not mention if he was speaking of any new agreement between the two neighboring nations or the long-time defensive pacts that the two countries have had.

Iran has several defense and security agreements with the regional nations, including Iraq, Syria and some Persian Gulf states, signed years ago.

He referred to the process of forming a new government in Iraq and the important role of the Iraqi parliament in this regard, and expressed the hope that the Iraqi lawmakers’ decision would prevent implementation of “the Zionist regime’s plots to disintegrate their country”.

“We hope that the representatives of the Iraqi people think of their country’s interests correctly given the sensitivity of the events in Iraq which can create instability in the region and given the Zionist regime’s restless zeal for Iraq’s disintegration,” Nobakht underlined.

“We are ready to help Iraq and if the Iraqi government requests, we will help them; we believe that violence and the terrorist groups should be eliminated from the region,” Jahangiri said in an interview with the Venezuelan Telesur TV channel.

Yet, he strongly rejected some western media allegations that Iran has sent forces to Iraq. “We haven’t dispatched any military force to Iraq until this moment,” he stressed.

Jahangiri expressed confidence that Iraq’s people and government, with the help of the country’s clerics and religious leadership who are seriously determined to fight the terrorists, will be able to drive out the Islamic State of Iraq and the Levant (ISIL) terrorists from their territory.

Also in June, Iranian Interior Minister Abdolreza Rahmani Fazli underlined that Iran is willing to support its neighbors against the flow of Takfiri and terrorist groups, but not by sending military forces to those countries.

“Such supports do not mean dispatching forces, but condemning terrorist moves and closing the borders are their meaning,” the Iranian interior minister said, addressing the administrative council meeting of North Khorassan province.

Yet, the Iranian interior minister reiterated that Iran supports its neighbors against the Takfiri and terrorist groups.

“We are responsible before God and our neighbors and, hence, support these countries,” Rahmani Fazli said.

Earlier, Iranian President Hassan Rouhani rejected alleged reports on the deployment of Iranian troops in Iraq, but said Tehran is ready to help its Western neighbor in its war on terrorists based on the international laws if requested by Baghdad.

“We, as the Islamic Republic, are Iraq’s friend and neighbor and have good relations with the Iraqi government and nation,” Rouhani told reporters in a press conference in Tehran.

“If the Iraqi government wants help, we will study it; of course no demand has yet been raised until today but we are ready for help within the framework of the international laws and at the request of the Iraqi nation,” he added.

“Of course, we should know that help and assistance is one issue, and interference and entrance (into the battlefield) is another. If the Iraqi government demands us we will help them, but the entrance of the Iranian troops (onto the scene of battles in Iraq) has never been considered,” the president said.