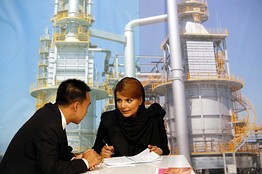 Global oil companies are flocking to Iran. At the annual Iran Oil, Gas & Petrochemical International Exhibition in Tehran, in May, some 600 major energy companies from 32 countries took part. Above an Iranian employee talks to a Chinese visitor.
European Pressphoto Agency

Talks on Iran’s nuclear program restart this week in Vienna with the uneasy situation in Iraq giving the discussions a sense of urgency.

Sanctions, the West’s weapon of choice, are keeping around 1.5 million barrels of Iranian oil from being sold and putting a squeeze on Tehran’s finances. This looked like a smart move until Iraq blew up.

Global oil companies are flocking to Iran. At the annual Iran Oil, Gas & Petrochemical International Exhibition in Tehran, in May, some 600 major energy companies from 32 countries took part. Above an Iranian employee talks to a Chinese visitor.
European Pressphoto Agency

Although the violence there remains far away from the majority of Iraq’s oil-producing region, it is close enough to give the market the shivers. As The Wall Street Journal’s Cassie Werber explains, the amount of speculative money in Brent crude, the global benchmark, has never been higher and more than ever this is being placed on a still higher price.

Saudi Arabia has been covering for Iran but it can open its taps only so far. A loss of Iraqi crude would be a shut-in too far.

So when representatives of the P5+1 group of countries gather in Vienna stakes are high. Iran suddenly has leverage and, it appears, will be sitting across the table from some rediscovered friends.

The mood music suggests a deal, albeit with a ticking clock acting as metronome.

The loudest voices, though, don’t belong to the diplomats around the negotiating table, but to the companies hoping to make some money out of any resolution. The Journal’s Jay Solomon, in Tehran, reports that global oil companies and auto makers are flocking to the Iranian capital to jockey for position.

CHENIERE REINS IT IN

The previous Energy Journal noted a deal to send American liquefied natural gas to Australia, for resale into Asian markets.

The seller is Cheniere Energy, a Houston-based company that is at the vanguard of the great U.S. gas-export push.

It already has an export facility under construction at Sabine Pass, La., and hopes to use the guarantee of the Woodside Petroleum deal and two others with Indonesia’s Pertamina to find financial backing for another facility at Corpus Christi, Texas.

In the race to export U.S. LNG, first could be everything. Cheniere’s shares are up 70% this year, reflecting its leading position.

Such a performance has led to some big salaries, with the $142 million received last year by Chief Executive Charif Souki making him one of the most highly paid executives in the U.S.

But a plan to issue shares to executives and employees has been dropped after opposition from investors, as the Journal’s Daniel Gilbert reports.

Cheniere has never turned a profit.