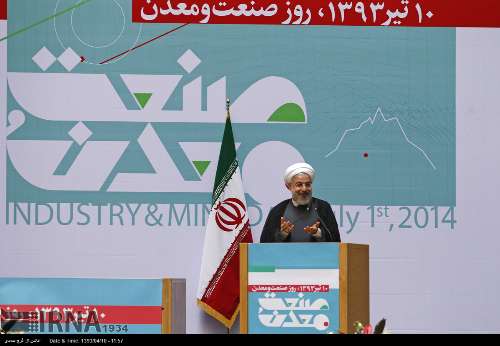 President underlines Iran’s economic boom after removal of all sanctions

TEHRAN (FNA)- Iran’s President Hassan Rouhani voiced his administration’s willingness to do its best to cut a final deal with the six major world powers, and underlined that such a deal will pave the ground for the removal of all sanctions and the country’s economic boom.

Speaking in a ceremony to celebrate the Mining and Industry Day in Tehran, President Rouhani pointed out that sanctions have already been eased and Tehran is committed to reach a conclusion out of its nuclear talks with the Sextet of world powers.

Rouhani noted that its administration is keen to open a new chapter in government’s collaboration with the private sectors.

Iran’s senior negotiator in talks with the six major world powers Seyed Abbas Araqchi underlined Tehran’s determination to enter the next round of talks with firm will, and called on the other side to do the same in order to reach a final and permanent agreement over Tehran’s nuclear activities.

Iran and the G5+1 (the five permanent sealed an interim deal in the Swiss city of Geneva on November 24, 2013 to pave the way for the full resolution of the decade-old dispute with Iran over the country’s nuclear standoff with the West. The deal came into force on January 20.

The sixth round of talks between Iran and the G5+1 over a comprehensive final deal is slated for early July, diplomatic sources said.

“Iran and G5+1 will start their next round of talks in Vienna on July 2,” an Iranian diplomat told FNA in Vienna.