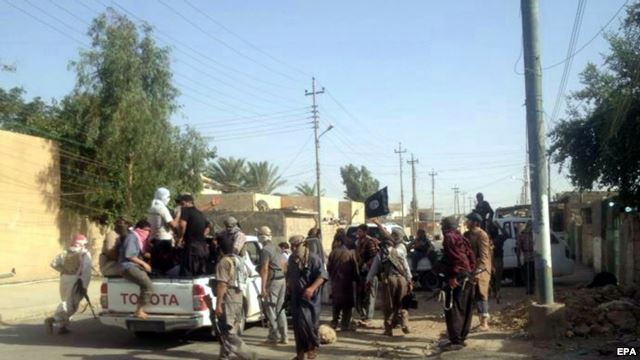 Iraqi Sunni fighters on the streets of Tikrit earlier this month.

Iraqi forces have been pressing with a counteroffensive to retake the northern city of Tikrit as Sunni-led jihadists who captured large swaths of territory in Iraq and Syria declared a “caliphate.”

Army helicopters struck at rebel positions and clashes broke out in various parts of Tikrit on June 29, a day after troops backed by tanks and helicopter gunships launched their operation to retake the city from the insurgents led by the Islamic State in Iraq and the Levant (ISIL) — an Al-Qaeda splinter group.

ISIL captured Tikrit earlier this month as they swept across large parts of northern and western Iraq.

On June 29, ISIL declared a “caliphate,” or Islamist state, extending from Aleppo in northern Syria to Diyala in Iraq.

Meanwhile, the Iraqi government said it had received the first five Sukhoi attack aircraft from Russia to help it fight the insurgents.

Security officials said five second-hand Sukhoi attack aircraft would enter service within a few days, and that more were on their way.

The Iraqi Defense Ministry said the planes were SU-25s.

The planes are believed to have been bought by the Iraqi government in a deal reportedly worth $500 million.

Su-25s are designed for ground attack, which would make them useful for Iraqi forces trying to root out ISIL-led militants from a string of towns and cities they have seized.

A spokesman for Prime Minister Nuri al-Maliki has said hundreds of soldiers have been killed since the insurgent offensive was launched on June 9, while the UN puts the overall death toll at over 1,000, mostly civilians.

Maliki, a Shi’a, has been blamed for failing to promote national reconciliation.

He has come under increasing pressure to form an inclusive government after the April elections.

Iraq’s top Shi’ite cleric, Grand Ayatollah Ali al-Sistani, this week called on political blocs to agree on the next prime minister by July 1, when the new parliament meets.

The National Coalition led by former Prime Minister Iyad Alawi announced on June 29 that it won’t attend the session “unless the political powers put a road map to stop the security deterioration and heal the rift within the country.”