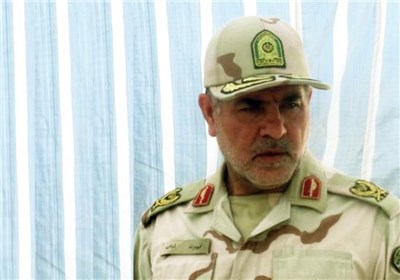 TEHRAN (Tasnim) – A senior commander of the Iranian border guards in the western province of Kermanshah said on Sunday there were no security threats in the province, adding that border guards would not allow enemies to have even the smallest moves along borders.

Speaking to the Tasnim News Agency in Kermanshah, Brigadier General Kiumars Sheikhi pointed to the recent visit by the Interior Minister to the western province, and stated that following the minister’s visit, appropriate measures would be taken to curb joint borders with Iraq.

The commander said the borders are being physically and electronically monitored.

He also denied the news that some border guards in Ghasre Shirin area have been killed, calling it psychological warfare.

Amid mounting terror activities by the Islamic State in Iraq and the Levant (ISIL) group in the neighboring Iraq, Iran’s armed forces have increased their presence along the country’s western borders.

In early June, following its large-scale offensives in Iraq, the ISIL seized control of most parts of Mosul, the second most populous city in Iraq and its surrounding Nineveh province.

Following Iraqi top Shiite cleric Grand Ayatollah Ali al-Sistani’s religious decree (Fatwa) which called on Iraqis to take up arms against terrorists, nearly 1.5 million Iraqis have volunteered to join battles against the al-Qaeda-linked militants. The volunteers consist of people from all walks of life including retired officers.