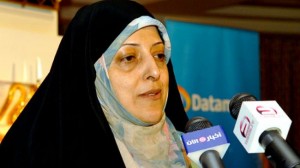 Tehran, June 27, IRNA — Vice-President and head of Department of Environment ( DoE) said that confidence building and obligation of developed countries to their historical commitments to confront consequences of climate change is necessary.

Maˈsoumeh Ebtekar, who is in Nairobi, Kenya, to attend the first UN Environment Assembly ( UNEA), participated in a working dinner session upon joint invitation of environment ministers of Poland, Peru and France, who were hosting the session.

The UN Undersecretary General and UNEP Executive Director Achim Steiner underlined importance of climate changes issue and necessity of progress in talks at the beginning of working dinner session.

Then, each of three hosting ministers delivered speeches and reminded that countries are facing many problems and there is no alternative for continuation of human life and his survival, except all countries take prompt steps toward decreasing green house gases.

Ebtekar, who attended the meeting as special guest, also delivered speech and said that confidence building between developed and developing countries is necessary to make sure about developed states commitments to their historical obligations as well as new commitments.

She underlined necessity of efforts by industrial states in direction to access a substitute agreement for Kyoto Protocol and said that in this direction equation, justice and fairness in regulating commitments should be observed and everybody should know that the principle of joint responsibility should be the most axis of the agreement.

Ebtekar said that world public opinion now is aware about climate change and is experiencing its consequences all around the world.

The First ever meeting of the United Nations Environment Assembly ( UNEA) held in Nairobi, Kenya, from June 23 to 27, 2014.

Around 1065 participants from 163 member countries as well as 113 ministers attended the 4–day meeting in Nairobi.