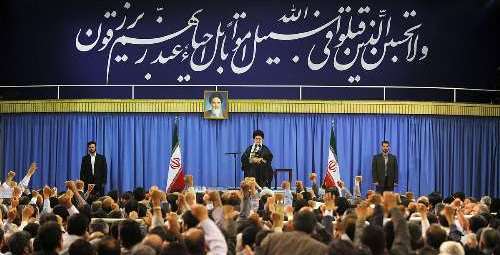 Leader of the Islamic Revolution Ayatollah Seyyed Ali Khamenei has warned against enemy plots to provoke sectarian conflicts among Shia and Sunni Muslims in the region to undermine the wave of Islamic Awakening.

“Today, the enemy is investing in civil wars in the region and pins hope on a Shia-Sunni war to relieve itself of the concern of Islamic Awakening,” the Leader said on Saturday.

Ayatollah Khamenei referred to the ongoing crisis in Iraq and stated that the remnants of the ousted regime of Iraqi dictator Saddam Hussein and a bunch of ignorant people are perpetrating crimes in that country.

“What is happening [in Iraq] is not a Shia-Sunni war. It is a war of terrorism against the opponents of terrorism and a war between pro-Westerners and the advocates of nations’ independence,” Ayatollah Khamenei pointed out.

The Leader made the remarks in an address to the families of more than 72 Iranian state officials and lawmakers, including then Judiciary chief Ayatollah Mohammad Beheshti, who lost their lives in a terrorist bomb attack on the headquarters of the Islamic Republic Party on June 28, 1981 and other martyrs of the city of Tehran.