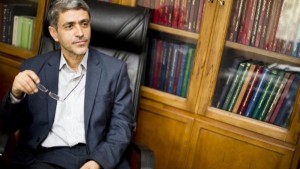 The meeting was held on the sidelines of the 39th Annual Meeting of the Islamic Development Bank in Jeddah, Saudi Arabia.

During the meeting also attended by heads of a number of subsidiaries of the Islamic Development Bank, the two sides called for enhanced cooperation.

It was agreed that organizations led by the IDB have an active participation in Iran, while stressing the necessity of their cooperation with Iranˈs private sector.

Based on todayˈs consultations between the two sides, a high-ranking delegation from three IDB subsidiaries will visit Iran to review grounds for cooperation.

The 39th Annual Meeting of the Islamic Development Bank is underway in Jeddah with participation of economy ministers and other officials from 56 member states.