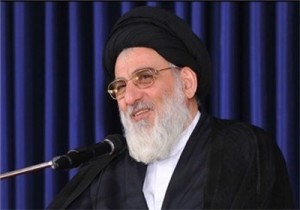 “Although implementing the micro-scale water projects is effective in the short term, but in the long term the problem remains unresolved,” said Ayatollah Seyyed Mahmoud Shahroudi in his Thursday evening meeting with Energy Minister Engineer Hamid Chitchian.

Chitchian had in the beginning of the meeting with Ayatollah Shahroudi and a number of other grand ayatollahs and prominent clergies announced his ministry’s investment in Persian Gulf and Sea of Oman water transfer project to Sistan-o-Balouchestan and central Iranian provinces.

Ayatollah Shahroudi added that the Energy Ministry should seriously pursue that project, as the water crisis would turn into a serious problem in the course of the years ahead, which would be graved than the oil crisis.

“Therefore, based on deep and precise studies, macro-scale water transfer projects need to be in the focus of attention right today so that the country would not be faced with water scarcity problem in the future and this is in need of strong will of the country’s high ranking officials,” said the ayatollah.

Referring to the results of implementing mega-projects in the country, he said that in addition to provision of water for the Iranian provinces that are entangled with a lingering draught problem, this project will also affect positively the climatic temperature of the country and pave the path for both industrial and agricultural development along its path.

Energy Minister Hamid Chitchian said here Thursday that his ministry has invested in a project to transfer Persian Gulf and Sea of Oman’s water to Iran’s Sistan-o-Balouchestan and central provinces after desalination to counter draught problems.

“Since the slat density of the Caspian Sea would have increased highly after desalination of its water and that was a threat against the aqualife there the Department of Environment (DoE) opposed that plan,” he said in a meeting with prominent clerics and sources of jurisprudence in Qom.

The energy minister added that therefore his affiliated ministry then proposed transferring of Persian Gulf and Sea of Oman’s water to those provinces instead.

Chitchian elaborated on provision of fresh water for various provinces of the country, keeping in mind the drastic decrease of precipitations up to 47% in 15 provinces during the years of lingering draught in central and southern Iranian provinces.

The energy minister also informed the country’s top religious personalities that due to water shortage problem the farmers in those areas have resorted to irrigation using well water.

The energy minister rejected the proposals made by some provincial governors and Parliament members for more dam construction to resolve the problem.

“Construction of new dams will not add to any water resources and will instead distribute the same resources’ waters, while some of the constructed dams have not reserved much water behind them,” he said.

Such mega-projects are being implemented in the country as Iranˈs soaring population growth further threatens the country’s water resources, already low in much of the country from insufficient rainfall and desert environment.

Some 60% of Iranˈs population is below the age of 25, and continues to increase. Water shortages are expected to remain a key resource problem in Iran, similar to other regions in the Middle East, and cause regional instability if policy-makers do not develop long-term water management strategies, particularly for irrigation projects.

Social and demographic changes, such as changes in living standards, expectations, consumption habits, rural to urban migration, are creating pressures on available water supplies that must be addressed to meet the needs of the growing nation. Practical steps can be taken to reach equilibrium between population and water resources.

The average flow of rivers and aquifers generated from precipitation is limited in all countries, but not population. The population in Iran doubled from 33.7 million in 1976 to 66.1 million in 2001.

Unquestionably, this growth is creating problems. Water availability is considered a severe constraint on socio-economic development and environmental protection when annual internal renewable water resources decrease to 1,000 m3 per capita.

Iranˈs per capita water resources availability decreased to 2,025 m3 in 1990, and is estimated to continue to reach 816 m3 in 2025, according to the United Nations Development Program (UNDP).

Water shortages and pollution affect the country at an almost national level. Devastating droughts are causing vast numbers of rural dwellers to move to urban areas. Consequently, water supplies must be increased through the development and conservation of water resources, and this development cannot be isolated from environmental protection.

Currently, 35% of the total population is suffering from drought and water shortages in northeastern, eastern, southeastern, south and central Iran. The lack of storage dams prevents the practical use of rainfall. Floods occur often.