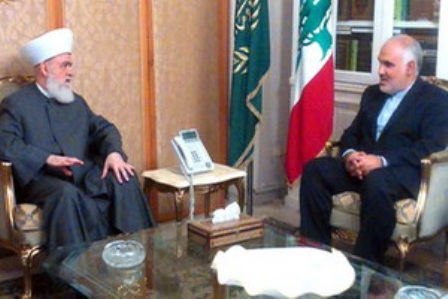 In a meeting with Iranian Ambassador to Lebanon Mohammad Fathali, he urged unity for confronting Daesh terrorists in Iraq, Lebanon and other states.

Referring to Iranˈs outstanding role in the region, he called for enhancement of brotherly ties between the two friendly states of Iran and Lebanon.

Sheikh Qabalan also hailed Iranˈs wise stances on regional developments and its efforts to foil plots against Muslims and to deepen unity and collaboration among Muslim nations.

ˈTakfiri groups are outcome of hegemonic powersˈ evil acts, which were formed to deal a blow to Muslim countries, split them into parts and create seditions,ˈ he said.

He further noted that the measures by terrorist groups in the region are taken in line with the Zionist regimeˈs interests.