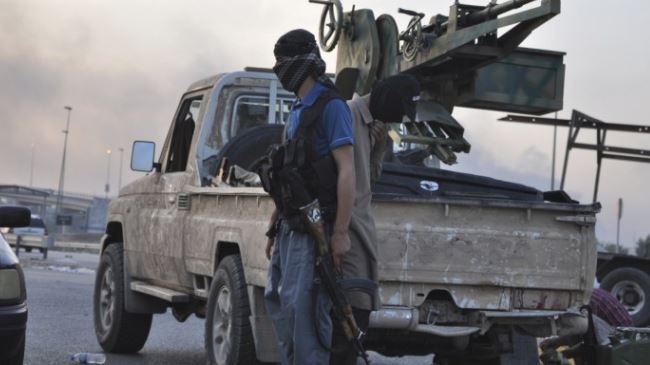 Paul: ISIS emboldened after US armed its allies in Syria

Sen. Rand Paul (R-Ky.) said Sunday that the Sunni militants taking over Iraq have quickly gained power because the United States armed their allies in Syria.

“I think we have to understand first how we got here,” he said on CNN’s “State of the Union.” “I think one of the reasons why ISIS has been emboldened is because we have been arming their allies. We have been allied with ISIS in Syria.”

Paul was asked whether the U.S. should shift its focus to Syria.

Paul downplayed the idea that ISIS is an immediate threat to the U.S., but said it could be “at some point.”

“I don’t think ISIS in in the middle of the battle right now thinking, ‘Hmm, I think we’re going to send inter-continental ballistic missiles to America,’” Paul said.

ISIS, an al Qaeda offshoot, has been collaborating with the Syrian rebels whom the Obama administration has been arming in their efforts to overthrow Syrian President Bashar al-Assad, Paul explained.

The administration has reportedly assisted the moderate opposition in Syria, but details about the dissemination of those resources are unclear.

“That is the real contradiction to this whole policy,” Paul said. “If we were to get rid of Assad,” it would become a “jihadist wonderland in Syria.”

Asked what he would do as president on Iraq, Paul deflected and did not give a straight answer. Instead, he pointed to the Reagan doctrine, and said Congress must ultimately determine the U.S. plan after engaging in a “full-throated debate.”

“The president doesn’t have unilateral authority to begin war,” said Paul, who couldn’t say whether he would support U.S. airstrikes in Iraq.

He said he’s not ruling U.S. assistance out, but said first Shiites must show they will fight for their country.

President Obama said in an interview airing Sunday that the Islamic State in Iraq and Syria poses a “medium and long-term threat” to the U.S., adding that it’s just one of a number of organizations to monitor.

“There are a lot of groups out there that probably have more advanced immediate plans directed against the United States that we have to be on constant guard for,” he told Norah O’Donnell in an interview broadcast on CBS’s “Face the Nation.”

Obama also said that the notion that a moderate rebel force backed by the U.S. could have stopped Assad and ISIS is a “fantasy.”

Iraq crisis, Quoted, Syria, US June 25, 2014
3 police forces killed in Kermanshah
Zarif: Iran not to cut any deal on redlines