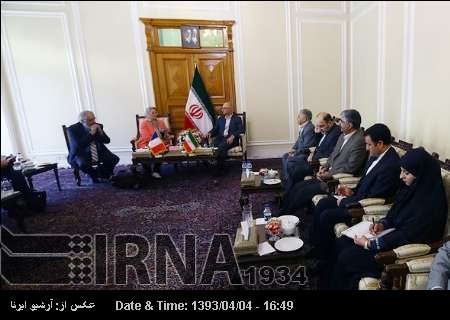 Tehran, June 25, IRNA – MP of Armenian minority of southern Iran Robert Beglarian said on Wednesday that religious minorities in the Islamic Republic of Iran enjoy equal rights with fellow citizens and based on the constitution, they are allowed to perform their religious rituals.

Speaking to French deputy director of the National Assemblyˈs Foreign Affairs Commission Odile Saugues, Beglarian said that exchange of parliamentary delegations provide a suitable opportunity for Iran and France to get informed of each otherˈs stances on various issues of mutual interest.

He said positive historical ground of Iran and France provide a suitable ground for mutual understanding and further political, cultural and economic cooperation.

He said more exchange of parliamentary delegations would facilitate bilateral ties, he added.

MP Yunaten Bet Kelia, who represents the Assyrian and Chaldean communities in the Iranian parliament, said for his part that religious minorities, including Assyrians, enjoy good and favorable social rights in Iran and Iran supports any effort to safeguard rights of the minorities.

Member of Parliament from the Armenian Community of northern Iran Karen Khanlari gave an upbeat outlook about the respect for the rights of north Armenians community and said that religious minorities enjoy the constitutional rights and equality with the fellow citizens in Iran.

Khanlari expressed concern about escalation of terrorism in the Middle East including Syria and Iraq and said terrorism is not a local or regional phenomenon, rather a global one requiring international campaign against terrorism.

He said the requisite for campaign against terrorism is preparing the ground for special global political environment without foreign intervention and political pressures.

ˈInternational community can play a significant role in preparation of the ground.ˈ

Saugues of France for her part underlined necessity of campaign against terrorism and hoped for further cooperation in that respect.