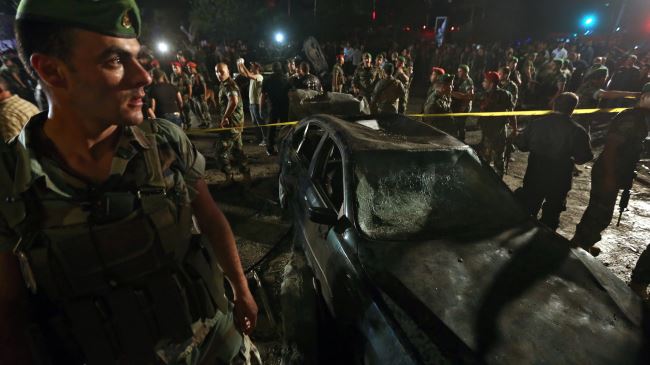 The Lebanese army and citizens gather at the site of a car bombing in a southern suburb of Beirut, Lebanon, June 24, 2014.

Iran has condemned recent terrorist attacks in Lebanon, denouncing them as part of an Israeli plot aimed at fomenting extremism and sectarian rifts in the Middle East.

“The growing trend of violence and extremism in the region, which stems from the engineered crisis in Syria, is in line with serving the goals and plots of the Zionist regime,” Iranian Foreign Ministry Spokeswoman Marzieh Afkham said on Tuesday.

“Undoubtedly regional nations, especially the resistant Lebanese nation, will, by maintaining unity, national solidarity and with fierce determination, foil the Zionist regime’s plots in the region [being hatched] under the guise of extremism and sectarianism,” she added.

Lebanon has been suffering from terrorist strikes carried out by al-Qaeda-linked militants as well as random rocket attacks, which are viewed as a spillover of the conflict in Syria.

On Tuesday, a car bombing in a southern neighborhood in the Lebanese capital Beirut killed a security officer and injured at least 20 people.

The bomb went off near a military checkpoint and a café full of soccer fans watching a FIFA World Cup match in the city’s Dahieh neighborhood.

The overnight attack is the second such bombing in Lebanon this week.

On Friday, a bomb blast rocked a Lebanese police checkpoint in eastern Lebanon.

The bomb went off when Internal Security Forces (ISF) personnel were searching a vehicle in Dahr al-Baidar checkpoint in the eastern Bekaa Valley. The blast killed at least one person and injured several others.