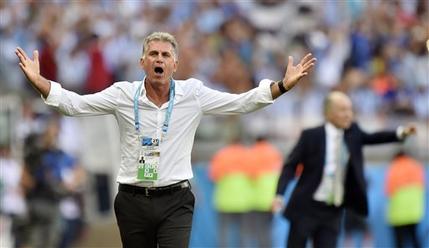 With a solitary World Cup win to their name – against the United States on 1998 – another for Iran against Bosnia today would alone be cause for big celebration, but with an improbable last-16 spot also up for grabs the party could really be one to remember.

Iran arrive in Salvador with just one point but a host of new fans thanks to a gutsy 0-0 draw with Group F rivals Nigeria and an excellent display against twice champions Argentina, where a late Lionel Messi goal denied them a famous stalemate.

They face already eliminated Bosnia at the Arena Fonte Nova knowing a win, coupled with defeat for Nigeria against qualified Argentina, could see them go through if goal difference goes their way.

Second-placed Nigeria, on four points, have a plus one goal difference with Iran on one point, on minus one.

A 1-0 win for Iran and 1-0 defeat for Nigeria would leave them level on both points and goal difference and make things very interesting. In that rare scenario, the rules state the teams must be separated by goals scored in all matches, then points between them and goals between them.

Given Iran and Nigeria would have both scored one goal each in the group, and they drew 0-0 against each other, that would not separate them so there would have to be a drawing of lots.

Much of Iran’s good work in Brazil has been built on a disciplined defensive structure but against the might of Argentina they showed plenty of will to break fast and attack dangerously, going close several times to claiming a shock win.

Such attacking endeavour has not been so forthcoming for Bosnia, whose defensive focus in their first World Cup proved too cautious and ultimately sealed their exit following 2-1 and 1-0 defeats to Argentina and Nigeria.