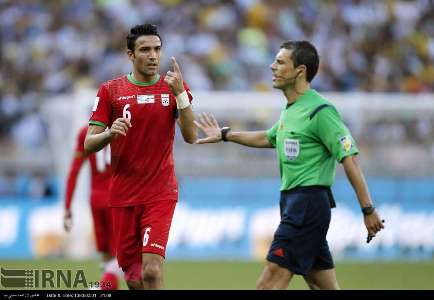 Tehran, June 25, IRNA – After Iranˈs complaint to FIFA over the refereeˈs poor judgment in Iran-Argentina match, FIFA assigned the referee to fourth official in his next match.

The head of the Iranian Football Federation Referees Committee Fereydoun Esfahanian said on Wednesday that the penalty kick had to be awarded to Iran by the referee Milorad Mazic.

The referee did not possess enough experience to help him judge this sensitive match, added Esfahanian, saying after Iranˈs complaint to Fédération Internationale de Football Association (FIFA) over his poor judgment in Iran-Argentina match, FIFA decided to assign him as fourth official in his next match.

Iran lost to Argentina 1-0 after the referee waved away a penalty kick for Iran against Argentina in the Brazil’s World Cup 2014.