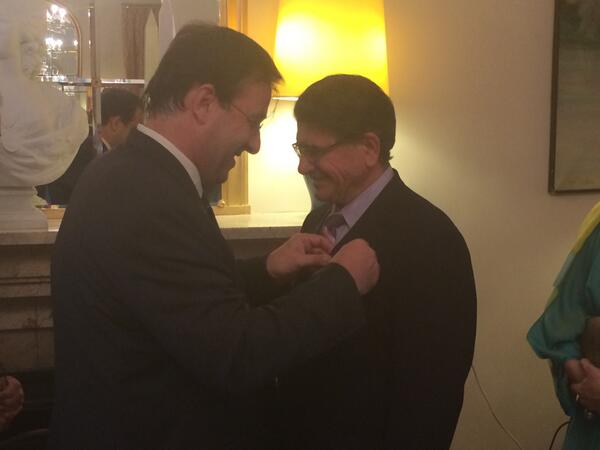 The French Ambassador to Tehran Bruno Foucher presented Shajarian the medal in recognition of the artistˈs lifetime achievements in Persian classics, wrote the Wednesday edition of the English-language newspaper Iran Daily.

On receiving the honor, Shajarian said, ˈDuring these years, I have made every effort to safeguard the ancient Iranian singing tradition with all its aspects, grandeur and opulence, and pass it on to the future generation.ˈ

ˈIranian music is not just a tradition. It clearly symbolizes an ancient everlasting civilization. Persian music reflects various aspects of civilization like architecture, poetry and literature. Persian melodies are nothing but praise of the order in the world.ˈ

Shajarian is the second Iranian vocalist to receive the medal after Shahram Nazeri, an undisputed icon of Kurdish and Persian classical and Sufi music, who received the medal in 2007.

The Ordre des Arts et des Lettres (Order of Arts and Letters) is an Order of France, established in 1957. Its purpose is the recognition of significant contributions to the arts, literature, or the propagation of these fields.

Shajarian is an internationally acclaimed classical singer and composer. He has been named ˈIranˈs greatest living master of traditional Persian musicˈ. The artist is also a good hand at Persian calligraphy.